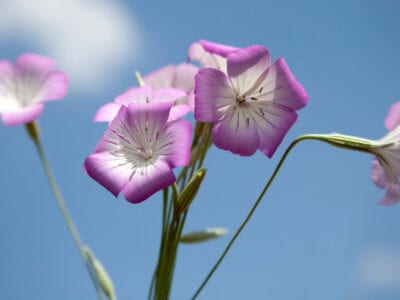 Common corn cockle (Agrostemma githago) has a flower like a geranium, but it is a wild plant common in the United Kingdom. What is corn cockle? Agrostemma corn cockle is a weed found in grain crops but it also produces a lovely flower and, if properly managed, can make a delightful addition to a flower garden. Corn cockle flowers are annuals but reseed readily, adding lovely lavender tones to a wildflower garden.

What is Corn Cockle?

Corn cockle flowers can be found in part of the United States, Canada, Australia, and New Zealand. It has become rarer in Britain as agricultural measures eradicate the plant. The focal point of Agrostemma corn cockle is the flowers. Stems are so slender as to almost disappear when in a field of other plants. The brilliant purple flowers are produced between May and September. Blooms may also be tinged a deep pink. Corn cockle flowers occur naturally in fields, ditches, and roadsides.

Seeds are available for this plant and best when directly sown into the garden or field. There are other types too.

While some areas may consider this plant a weed, it can also be a lovely addition to the garden. The rigid thin stems make common corn cockle an excellent cut flower.

Sow seeds in full sun in tilled average soil. You can direct sow in early spring or start them indoors at least six weeks before the date of the last frost. Thin plants to 12 inches (31 cm.) apart and apply a light mulch around the base of the seedlings to prevent competitive weeds.

These beauties can get 3 ½ feet (1 m.) tall, so place them at the back of a flower bed to allow lower plants to compliment their color.

Like the majority of plants, common corn cockle doesn’t like to be sited in boggy soil. Fertility isn’t as important as the drainage capability of the site.

As a wildflower, Agrostemma corn cockle grows naturally well without human interference. It thrives on the rhythm of the seasons and will come up for you year after year with a fresh generation seeded the previous fall.