Dianthus Plants: How To Grow Dianthus 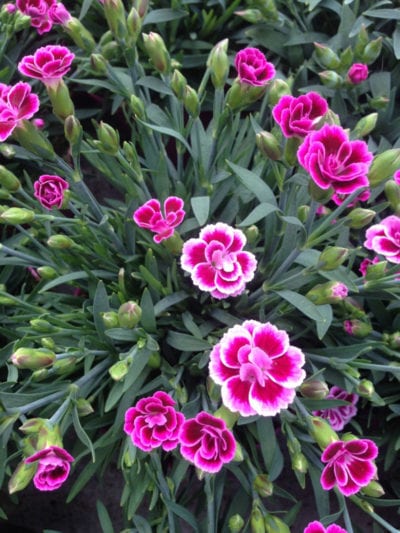 Dianthus flowers (Dianthus spp.) are also called “pinks.” They belong to a family of plants which includes carnations, and are characterized by the spicy fragrance the blooms emit. Dianthus plants may be found as a hardy annual, biennial or perennial and most often used in borders or potted displays. A quick tutorial on how to grow dianthus reveals the ease of care and versatility of this attractive flowering plant.

The dianthus plant is also called Sweet William (Dianthus barbatus) and has a fragrance with cinnamon or clove notes. The plants are small and usually between 6 and 18 inches (15-46 cm.) tall. Dianthus flowers are most often in pink, salmon, red and white hues. The foliage is slender and sparsely spread on thick stems.

Dianthus had a short blooming season until 1971, when a breeder learned how to grow forms that did not set seed and, therefore, have a prolonged bloom period. Modern varieties will typically bloom from May to October.

Plant pinks in full sun, partial shade or anywhere they will receive at least 6 hours of sun.

The plants need fertile, well-drained soil that is alkaline.

Wait until the danger of frost has passed when planting dianthus and place them at the same level they were growing in the pots, with 12 to 18 inches (30-46 cm.) between the plants. Do not mulch around them.

Water them only at the base of the plant to keep the foliage dry and prevent mildew spotting.

How to Care for Dianthus

Instructions on how to care for dianthus are very straightforward. Water the plants when dry and apply fertilizer every six to eight weeks. You may also work a slow-release fertilizer into the soil at planting, which will release you from the need to feed the plants.

Some varieties of dianthus are self-sowing, so deadheading is extremely important to reduce volunteer plants and to encourage additional blooming.

Perennial varieties are short lived and should be propagated by division, tip cuttings or even layering. Dianthus seed is also readily available at garden centers and may be started indoors six to eight weeks before the danger of frost has passed.

There is a dianthus plant for almost any garden space and region. The typical annual dianthus is the Dianthus chinensis, or Chinese pinks.

The perennial varieties include Cheddar (D. gratianopolitanus), Cottage (D. plumarius) and Grass pinks (D. armeria). The foliage on all of these is blue-gray and each comes in a rainbow of colors.

D. barbatus is the common Sweet William and a biennial. There are both double and single flowers and the variety reseeds itself.

Printer Friendly Version
Read more about Dianthus
Next>
Did you find this helpful? Share it with your friends!
FacebookTweetPinEmail
Related Articles
Newest Articles
You might also like…
Additional Help & Information