Dutchman's Breeches
By: Becca Badgett, Co-author of How to Grow an EMERGENCY Garden
Printer Friendly Version 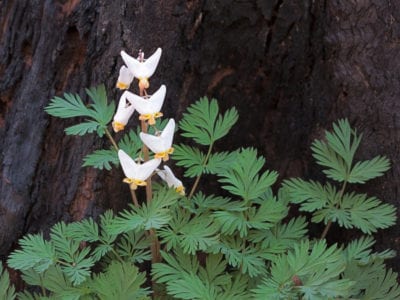 You’re likely to find Dutchman’s breeches wildflower (Dicentra cucullaria) blooming in late spring and growing with other wildflowers in shaded woodland areas. Frilly foliage and unusual blooms appear delicate and attractive. This may lead you to wonder: can you grow a Dutchman’s breeches plant in your cultivated landscape? You might be able to grow this plant if you can provide the right Dutchman’s breeches growing conditions.

Care of Dutchman’s breeches is fairly minimal when they’re located in the right spot. Dutchman’s breeches wildflower grows best in conditions similar to their native woodland habitat. Dappled shade and organic, humus soil, such as that found on the forest floor, facilitate the best growth.

Acidic, moist soil is necessary for the brief bloom of the plant. Soil should dry out during dormancy for ideal Dutchman’s breeches growing.

What is Dutchman’s Breeches?

Blooms (called spurs) are similar to those of the bleeding heart plant, but shaped differently, more like a pair of pantaloons than a heart – thus, the common name of Dutchman’s breeches wildflower. The botanical name is Dicentra cucullaria.

In the wild, Dutchman’s breeches wildflower is often found growing with squirrel corn (D. canadensis), earning the playful pair the name of Boys and Girls. You may also hear Dutchmen’s breeches called Staggerweed. This refers to cattle that have overindulged in the wild plant in their pastures, causing convulsions and a staggering gait.

The plants also create a poppy-like hallucinogen and should not be consumed by humans. In fact, it is probably best to wear gloves when taking care of Dutchman’s breeches.

Can You Grow a Dutchman’s Breeches Plant?

If your landscape has the appropriate Dutchman’s breeches growing conditions as described above, the answer is yes. The edge of nearby woodlands is a great place to plant this spring blossom.

Keep in mind that this plant grows from an underground tuber and may spread rapidly when planted in the right location. Allow plenty of room for its spread or be prepared to dig and replant tubers during the dormant season.

Seeds of the plant are often spread by ants, so expect to see them in unexpected locations in the nearby landscape. The rich soil created by ant’s waste in their nesting places is ideal for Dutchman’s breeches growing conditions as well. Transplant these into an appropriate location, if necessary.