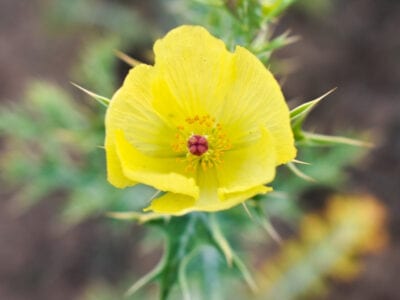 Botanists aren’t sure where Mexican prickly poppy originated, although many think the prickly poppy plant is native to the southeastern United States, Mexico, tropical South America, and the Caribbean. Regardless of its beginnings, the plant has naturalized across the eastern half of the United States.

Growing Mexican prickly poppies is easy, and prickly poppy flowers are pretty, but keep in mind that the plant is extremely prickly and may not be a good choice for places where children play. It may not work well along sidewalks, driveways, and walking paths.

Toxicity: All parts of Mexican prickly poppy are toxic if ingested, especially the seeds. The plant’s level of toxicity depends on several factors, including the weight, age, size, and physical condition of the person. Children are most susceptible. Toxicity also depends on the season and the plant’s stage of growth. It is also toxic to livestock, but they rarely bother this formidable plant. Deer also tend to give prickly poppy plants a wide berth.

Invasiveness: Prickly poppy is considered an invasive species in some areas. Consider the plant’s aggressive nature before planting prickly poppy flowers in your garden. Check with your local extension office or Department of Fish and Wildlife for specifics.

Prickly poppy flowers need full sunlight. The plant thrives in poor sandy or rocky soil but adapts to nearly any well-drained soil. Keep the plants moist until the roots are established; thereafter, it is drought-tolerant and requires moisture only during hot, dry weather.

Prickly poppy plants are pest resistant but may be bothered by diseases such as downy mildew, root rot, or anthracnose especially in overly wet conditions. Deadhead regularly to keep the plant neat and to discourage rampant self-seeding.