Four O'clocks
By: Becca Badgett, Co-author of How to Grow an EMERGENCY Garden
Printer Friendly Version 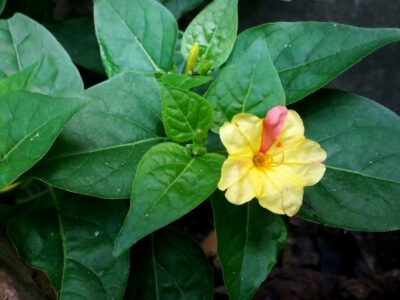 Many varieties of the flower exist, including some that are native to the United States. Native Americans grew the plant for medicinal properties. Mirabilis multiflora is called the Colorado four o’clock.

By now you may wonder what four o’clock flowers look like. They are tubular-shaped blooms in colors of white, pink, purple, red, and yellow that grow on erect to trailing green stems. Different flower colors can appear on a single stem in some varieties. Bi-color flowers are common, such as a white flower with red markings on the throat.

How to Grow Four O’clocks

It is easy to grow four o’clocks in the garden or natural area. Four o’clock flowers grow from seeds or division of the roots. Once planted, collect four o’clock’s hard, black seeds for planting in other areas. Four o’clocks flourish in a full sun to part sun area and are best planted where you can enjoy the heady fragrance. It is helpful to soak or nick the seed coat before planting.

A low maintenance bloom, this reliable flower needs only occasional watering and is somewhat drought resistant. If seeds are not collected when they form near the end of the bloom season, expect numerous four o’clocks to sprout next summer. These can be removed if coming up too thickly or in an unwanted area. Plants can be limited by growing in containers, where they will often take a cascading form.

This herbaceous perennial dies back to the ground after frost to again return in late spring when soil temperatures have warmed. Add the wonderful four o’clock to your garden for fragrance and bountiful evening blooms.