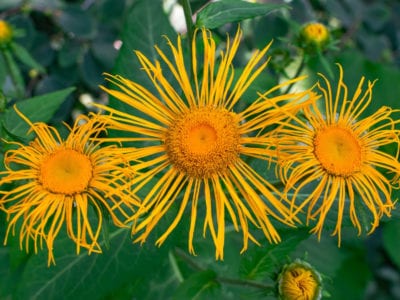 Perennial flowers give the gardener a lot of value for their dollar because they come back year after year. Inula is an herbal perennial that has value as a medicinal as well as an ornamental presence in the yard. There are several types of Inula plant useful to the landscape and home. Also known as Elecampane root, learn how to grow Inula plants and harvest their antifungal and antibacterial abilities.

Inula is a bushy herbaceous summer flowering plant. It blooms from July to October in most zones and produces 5-inch (12.7 cm.) blooms with slender rayed petals in yellow and deep orange-yellow. Most species are hardy to USDA planting zones 5 to 8.

Inula is a low maintenance plants that usually get only about 1 to 1 ½ feet (30 to 45.7 cm.) tall with a similar spread. However, Inula helenium may get as tall as 6 feet (1.8 m.) in appropriate conditions.

Rockeries, perennial gardens and borders are perfect areas for growing Inula plants, although you can also use them in container gardens. Some types of Inula plant are native in North America and are found in damp pastures, roadsides and unmanaged fields.

There are around 100 species in the Inula genus. A vintage herb, Inula helenium is an ingredient in absinthe, vermouth and some perfumes. Most types of Inula plant have herbal qualities and have been part of treatments for digestive ailments, respiratory illness and to enhance the immune system.

The Chinese had information about Inula plants that showed them useful in Eastern medicine as well as the source for xuan fu hua, an important scent.

Inula helenium and I. magnifica found growing wild in the United States have naturalized when they escaped from cultivation. The majority of the genus is native to central Asia. Inula verbasscifolia is native to the Balkans and Italy and has foliage like lamb’s ears, with fuzzy white hairs.

How to Grow Inula Plants

Start seeds indoors in flats 6 to 8 weeks before the date of the last frost. Transplant them outside when soil temperatures have warmed to at least 60 F. (16 C.). Plant them 12 inches (30 cm.) apart and keep the seedlings well watered.

Inula will often form only vegetative growth the first year but will flower prolifically the next year. Plants in some climates will spread each year and require division approximately every third year. In perfect conditions they can also self seed.

Inula plants need plenty of space to grow, well drained soil and a sunny location. They are tolerant of a range of soil types, but avoid heavy clay soils which do not drain well.

Prune back the plants in early spring to remove the dead stems from winter.

These relatives of aster plants benefit from a top dressing of manure around the base of the plants in spring.

Give them a little attention and these beautiful flowers will be around for decades of enjoyment.