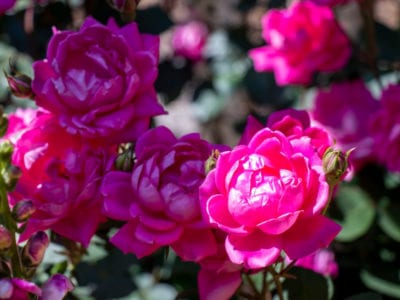 Knockout roses have the reputation of being the easiest care, lush roses in a garden. Some call them the best landscape roses on the planet. Given this praise, you are sure to be upset if your knockout roses are spindly rather than full. Leggy knockout roses are easily transformed by pruning, as long as you do it right. Read on for information on how to prune knockout roses.

Knockout roses really are great plants that bloom repeatedly without much maintenance. You don’t even need to deadhead the blooms when they fade.

“Low care” does not mean “no care” though. If you’ve been ignoring all maintenance, it’s little wonder that you have spindly knockout roses instead of compact bushes filled with flowers. The key to getting bushier knockout roses is seasonal pruning.

It’s natural to want your knockout roses to be healthy and vital plants. You don’t have to invest a whole lot of time to have bushier knockout roses either, usually just an annual pruning that removes dead or diseased branches and reduces height, if that is an issue.

Knockout roses bloom on new growth, not old growth. This means that generally, you can prune it whenever you like without ruining the season’s flowers. Although, the best time to do your most extensive pruning is in late winter or early spring because the plant will still produce new growth before bloom season.

How to Prune Knockout Roses

If your knockout roses are spindly, you may need to do a rejuvenation or renovation pruning the first year rather than just an annual pruning. Don’t go overboard and take all of those leggy stems down to a few inches (8 cm.). This type of major pruning for leggy knockout roses should be done over three years. In the end, you will have bushier knockout roses.

Are you wondering exactly how to prune knockout roses for rejuvenation? You’ll need sharp, sterilized pruners and garden gloves to get started. Identify about one-third of the stems that seem the oldest and cut those back to ground level the first spring. A year later, do the same thing with half of the stems you didn’t cut the first year, finishing up with the rejuvenation pruning the third year.

Printer Friendly Version
Read more about Knock Out Roses
<Previous
Did you find this helpful? Share it with your friends!
FacebookTweetPinEmail
Related Articles
Newest Articles
You might also like…
Additional Help & Information