What Is The Mandrake Plant: Is It Safe To Grow Mandrake In The Garden 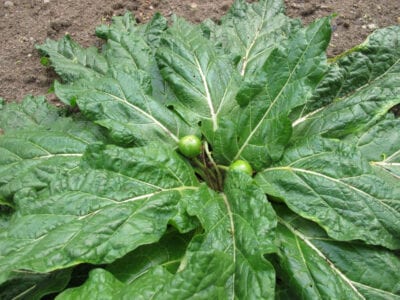 What is the Mandrake Plant?

Wrinkled and crispy mandrake foliage might remind you of tobacco leaves. They grow up to 16 inches (41 cm.) long, but lie flat against the ground, so the plant only reaches a height of 2 to 6 inches (5-15 cm.). In spring, flowers bloom at the center of the plant. Berries appear in late summer.

Mandrake roots can grow up to 4 feet (1 m.) long and sometimes bear a remarkable resemblance to a human figure. This resemblance and the fact that eating parts of the plant brings on hallucinations have resulted in a rich tradition in folklore and the occult. Several ancient spiritual texts mention the properties of mandrake and it is still used today in contemporary pagan traditions such as Wicca and Odinism.

Like many members of the Nightshade family, mandrake is poisonous. It should only be used under professional supervision.

Mandrake is hardy in USDA zones 6 through 8. Growing mandrake in deep, rich soil is easy, however, the roots will rot in poorly drained or clay soil. Mandrake needs full sun or partial shade.

It takes about two years for the plant to become established and set fruit. During that time, keep the soil well watered and feed the plants annually with a shovelful of compost.

Never plant mandrake in areas where children play or in food gardens where it may be mistaken for an edible plant. The front of perennial borders and rock or alpine gardens are the best places for mandrake in the garden. In containers, the plants remain small and never produce fruit.

Propagate mandrake from offsets or seeds, or by dividing the tubers. Collect seeds from overripe berries in fall. Plant the seeds in containers where they can be protected from winter weather. Transplant them into the garden after two years.

Printer Friendly Version
Read more about Mandrake
Next>
Did you find this helpful? Share it with your friends!
FacebookTweetPinEmail
Related Articles
Newest Articles
You might also like…
Additional Help & Information