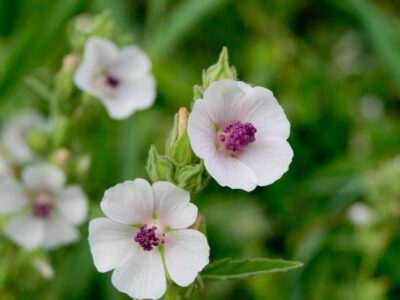 What is a marshmallow plant? Native to western Europe and North Africa, the marshmallow plant (Althaea officinalis) has had an important place in human culture for millennia. The root was boiled and eaten as a vegetable by the Greeks, Romans, and Egyptians. It is mentioned as being eaten in times of famine in the Bible. It has also been used medicinally for just as long. (The name “Althea,” in fact, comes from the Greek “althos,” which means “healer”).

The root contains a slimy sap that humans aren’t able to digest. When eaten, it passes through the digestive system and leaves behind a soothing coating. Even today the plant is used for a wide variety of medical ailments. It gets its common name, however, from a confection developed in Europe much later.

French chefs discovered that that same sap from the roots could be whipped with sugar and egg whites to create a sweet, moldable treat. Thus, the ancestor of the modern marshmallow was born. Unfortunately, the marshmallows you buy in the store today are not made from this plant.

If you are growing marshmallow plants at home, you need a relatively wet place to do it. As the name suggests, marshmallows like moist soil.

They grow best in full sun. The plants tend to reach a height of 4 to 5 feet (1-1.5 m.) and should not be grown with other sun loving plants, as they will quickly grow up and shade them out.

The plants are very cold hardy, and can survive down to USDA zone 4. Seeds are best sown directly into the ground in late summer or early fall. The seeds can also be planted in the spring, but they will need to be chilled for several weeks first.