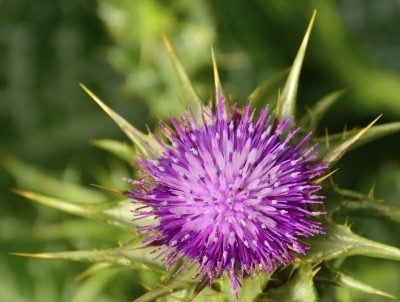 Milk thistle (also called silybum milk thistle) is a tricky plant. Prized for its medicinal properties, it is also considered highly invasive and is being targeted for eradication in some areas. Keep reading for information about planting milk thistle in gardens, as well as combating milk thistle invasiveness.

Milk thistle (Silybum marianum) contains silymarin, a chemical component known to improve liver health, earning the plant its status as a “liver tonic.” If you want to produce your own silymarin, milk thistle growing conditions are very forgiving. Here are some tips for planting milk thistle in gardens:

You can grow milk thistle in gardens with most types of soil, even soil that is very poor. As milk thistle is often considered a weed itself, virtually no weed control is needed. Plant your seeds ¼ inch (5 mm.) deep just after the last frost in a spot that receives full sun.

Harvest the flower heads just as the flowers start to dry and a white pappus tuft (like on a dandelion) begins to form in its place. Place the flower heads in a paper bag in a dry place for a week to continue the drying process.

Once the seeds are dried, hack into the bag to separate them from the flower head. The seeds can be stored in an air-tight container.

While safe for humans to eat, milk thistle is considered toxic to livestock, which is bad, as it often grows in pastures and is hard to get rid of. It is also not native to North America and is considered highly invasive.

A single plant can produce over 6,000 seeds that can remain viable for nine years and germinate at any temperature between 32 and 86 degrees F. (0-30 C.). Seeds can also be caught in the wind and carried easily on clothes and shoes, spreading it to neighboring land.

For this reason, you should really think twice before planting milk thistle in your garden and check with your local government to see if it is even legal.