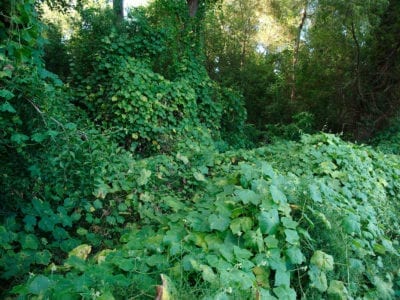 According to the Invasive Plant Atlas of the United States, invasive plants are those that “have been introduced by humans, either purposely or by accident, and have become serious environmental pests.” How to spot invasive plants? Unfortunately, there is no simple way of identifying invasive plants, and no common feature that makes them easy to spot, but the following information should help.

How to Tell if a Species is Invasive

Keep in mind that invasive plants aren’t always ugly. In fact, many were transported because of their beauty, or because they were effective, fast-growing groundcovers. Invasive species identification is further complicated because many plants are invasive in certain areas but perfectly well-behaved in others.

For example, English ivy is beloved in many parts of the U.S., but these fast-growing vines have created serious problems in the Pacific Northwest and eastern coastal states, where attempts at control have cost taxpayers millions of dollars.

The best way to recognize common invasive species is to do your homework. If you aren’t sure about identifying invasive species, take a picture and ask experts at your local cooperative extension office to help you identify the plant.

You can also find experts at places such as Soil and Water Conservation, or Departments of Wildlife, Forestry, or Agriculture. Most counties have weed control offices, especially in agricultural areas.

The Internet provides an abundance of information on specific invasive species identification. You can also search for resources in your particular area. Here are a few of the most reliable sources:

Most Common Invasive Species to Watch For

The following listed plants are invasive pests in many areas of the United States: