What Is Mullein: Learn About Growing Mullein Uses And Disadvantages

Mullein
By: Becca Badgett, Co-author of How to Grow an EMERGENCY Garden
Printer Friendly Version 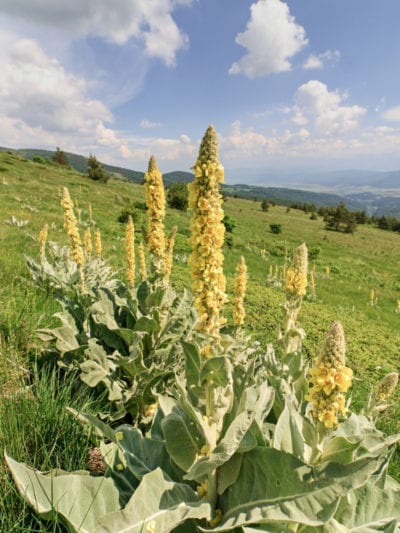 You’ve likely seen mullein plants growing in fields and along roadsides. They’re often attractive, with tall spikes of yellow flowering rosettes. This biennial plant, Verbascum thapsus, was historically used as an herbal treatment for coughs, congestion, chest colds, bronchitis, and inflammation. Native Americans and soldiers during the Civil War era made teas from leaves of mullein plants to treat asthma. During the 1800’s, settlers used it in their compounds to treat tuberculosis.

Common mullein plants are large, erect specimens with huge, furry leaves and tall stalks of yellow flower rosettes. The attractive foliage and flowers, as well as mullein uses, lead some to grow mullein in gardens. However, common mullein produces seeds prolifically, leaving them for decades before germination. Seeds often germinate in disturbed areas of roadways, fields, and riverbanks.

This may lead the gardener to wonder, “What is mullein?” and “Should I think of growing mullein in gardens?” Common mullein in gardens is considered a noxious and invasive weed in many states, but more than 300 varieties of ornamental mullein plants can grow in the garden or natural areas without abundant reseeding.

How to Grow Mullein in Gardens

Learning how to grow mullein is easy; just watch it grow once it has sprouted, if you have the common type. Varieties of mullein, or velvet plants, in gardens need a little more care.

Mullein plants of the common variety can grow as tall at 10 feet (3 m.) when flowering. Once you’ve planted mullein in gardens, expect to spend time removing fuzzy rosettes if you don’t want it to spread. Remove the flower stalk before seeds have dispersed to avoid abundant spread. Hybrid types of mullein in the garden are not as invasive as the common type.

Grouped together and called ornamental mullein, hybrid varieties are more suitable when growing mullein in gardens. Flowers in colors of white, pink, lavender, and yellow compliment the sunny garden. Wand mullein is another option for the sunny flower bed. Ornamental mullein uses include any area with good drainage and full sun. Flower stalks are striking when in bloom.

Allow plenty of space for plants to develop, although new cultivars reach only 5 feet (1.5 m.), with some bred to be only 18 inches (46 cm.) in height. Most hybrids are biennials or short-lived perennials.

Now that you’ve learned what is mullein, you can make an informed decision before growing it or letting it stay in your landscape.

Printer Friendly Version
Read more about Mullein
Next>
Did you find this helpful? Share it with your friends!
FacebookTweetPinEmail
Related Articles
Newest Articles
You might also like…
Additional Help & Information