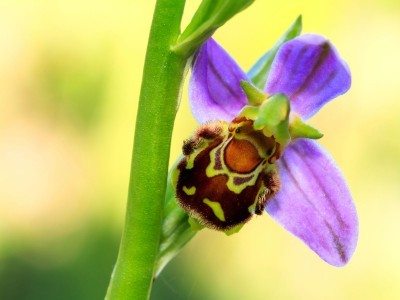 Take a look at a blooming bee orchid and you’ll see that the name is well deserved. The fuzzy, little bee orchid flowers look like real bees feeding on three pink petals. This is one of nature’s clever tricks, as bees visit the plant in hopes of mating with the little faux bees. This bit of bee orchid mimicry ensures the plant is pollinated, as the male bees transfer the pollen to nearby female plants.

The sweet aroma doesn’t hurt either when it comes to attracting amorous pollinators. However, in spite of all that effort and trickery, bee orchid flowers are primarily self-pollinating.

Bee orchid flowers (Ophrys apifera) are native to the U.K, but the flowers are threatened in some areas, largely due to urban development and agriculture. The plant is protected where populations are vulnerable, including Northern Ireland. Bee orchid flowers are often found in disturbed areas such as open meadows, grasslands, roadsides, railroad embankments, and pastures.

Bee orchids aren’t easy to find in the United States, but you may be able to locate the plant from a grower that specializes in orchids – either on-site or online. Bee orchid cultivation is best in a Mediterranean climate, where it grows during the winter and blooms in spring. Orchids prefer moist, humus-rich soil.

Plant bee orchids in a location free of moss killers and herbicides, which may kill the plant. Similarly, avoid fertilizers, which don’t benefit the plant but can encourage grasses and other wild plants that can smother the delicate orchids.

Other than that, simply sit back and enjoy the interesting appeal of bee orchid plants.