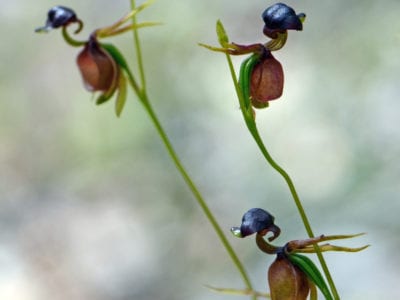 Native to the Australian wilderness, flying duck orchid plants (Caleana major) are amazing orchids that produce – you guessed it – distinctive, duck-like blooms. The red, purple, and green blooms, which appear in late spring and early summer, are tiny, measuring only ½ to ¾ inches (1 to 2 cm.) in length. Here are a few more interesting facts about flying duck orchids.

The complex flowers have evolved to attract male sawflies, which are tricked into thinking the plants are female sawflies. The insects are actually trapped by the “beak” of the plant, forcing the unsuspecting sawfly to pass through the pollen as it exits from the trap. Although the sawfly may not intend to be a pollinator for flying duck orchid plants, it plays a critical role in the survival of this orchid.

Flying duck orchid plants are so unique that the plants were featured on Australian postage stamps, along with other beautiful orchids endemic to that country. Unfortunately, the plant is on also Australia’s vulnerable plant list, due primarily to habitat destruction and a decrease in the numbers of critical pollinators.

Can You Grow Flying Duck Orchid?

Many plant lovers are curious about flying duck orchid care, but as of yet, propagating and growing flying duck orchids out of certain parts of Australia isn’t possible. Although countless people have tried, flying duck orchid plants have never survived long without the presence of the fungus. It is believed that the fungus actually keeps the plant healthy and fights off infections.