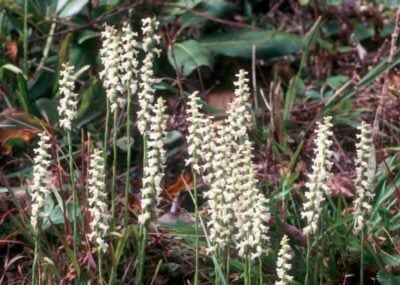 Also known as nodding spiranthes, lady’s tresses orchid (Spiranthes cernua) grows wild throughout most of the central and eastern parts of the United States and Canada, as far west as Texas.

Spiranthes lady’s tresses orchids grow in marshes, bogs, woodlands, and riverbanks as well as along roadways, lawns, and other disturbed habitats. So far, the plant is not endangered in its native habitat.

How to Grow Nodding Lady’s Tresses

Spiranthes lady’s tresses are easy to grow. The plant, which slowly spreads by way of underground rhizomes, eventually forms colonies that provide incredible beauty to the landscape.

Spiranthes lady’s tresses orchids are generally found at nurseries or greenhouses that specialize in wildflowers or native plants. Don’t attempt to remove the plant from its natural habitat. It rarely works and may be illegal in some areas.

Growing nodding lady’s tresses need regular irrigation to keep the soil consistently moist. Be careful not to overwater to the point of sogginess, but never allow the soil to become bone dry.

Once the plant is mature, it’s easy to propagate by dividing offsets or rhizomes. If you’re adventurous, you can also allow seedheads to dry after blooms wilt, then collect and plant the seeds.