Where Do Orchids Grow Naturally In The Wild? 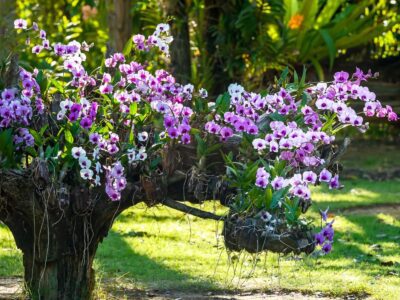 Orchids are one of the world’s most show stopping flowers. They have an exotic appeal and feature many forms and hues. Certain varieties of orchid are commonly found in nurseries and the floral centers of supermarkets, while others are elusive, rare, and very valuable. This diversity leads one to ask, “Where do orchids grow in the wild?” There are more than 20,000 species in the genus. Such diversity means they are endemic in many areas.

Orchids growing in the wild is a rare sight for many in North America and parts of Europe, but although not typically spotted, many species are native to these locations. Spotting an orchid in the wild may require the seeker to look up, since most orchids grow on trees. But you can also spot them in other locations depending upon the variety and species.

How Do Orchids Grow in the Wild?

Most orchids are epiphytes that grow on trees, but some are terrestrial in the ground, while others are lithophytic and grow on rocks. One species, Habenaria repens, even grows in the water. But for the bulk of the species, the plants will be found growing on other plants, particularly trees. The majority of these epiphytes are found in tropical to sub-tropical regions of the world. Trees with rough bark that holds moisture are particular favorite sites, but orchids are also found in the crevasses and inner branches of other varieties of tree. Epiphytic orchids develop a pseudobulb which stores moisture and have thick leathery leaves with a protective cuticle to prevent water loss. While epiphytes may appear to be living off the tree or plant, they actually derive nutrients and moisture from the air. Terrestrial plants root in rich humus and have fleshy roots. Lithophytic varieties nest in organic material deposited on rocks.

Where Do Orchids Grow in the Wild?

The orchid natural habitat extends to all parts of the globe with the exception of Antarctica, where it is too cold to support their growth. Every other continent is host to species of orchid and they are even known to migrate from their specific range. Such is the case with the giant orchid, native to the Mediterranean, but recently spotted in South East England. It grows up to 3 feet (1 m.) in height with elegant purple blooms. North America boasts over 200 native species of orchid.

The most cold hardy orchids come from the cymbidium and dendrobium groups, and can even survive brief freezes. One of the more commonly known and used orchids is the vanilla orchid. It hails from South and Central America. They are considered semi-epiphytic and develop as vines. After flowering and proper pollination the plants produce beans which are the source of the sought after flavor.

One of the more available plants is Phalaenopsis or moth orchid. It is commonly found as a gift plant and usually sports hot pink flowers. It is also possible to find dancing lady, boat, slipper, reed, butterfly, and pansy orchids.

Orchids can be finicky, especially when it comes to getting them to re-bloom. As a general rule, orchids need to be watered once per week. The medium should be a special orchid soil or a combination of perlite, sphagnum moss, and shredded bark. This, along with drainage holes will allow any excess moisture to evacuate, an important consideration to prevent root rot. Set the container in a brightly lit area such as an eastern or western window, but avoid the southern exposure which is too bright. Most orchids respond to weekly feeding with a specially formulated orchid food, but suspend feeding in November until spring. After bloom, cut off the spend flower stem and re-pot in fresh soil. With a little luck, the plant may bloom the following year.

Printer Friendly Version
Read more about Orchids
<Previous
Did you find this helpful? Share it with your friends!
FacebookTweetPinEmail
Related Articles
Newest Articles
You might also like…
Additional Help & Information