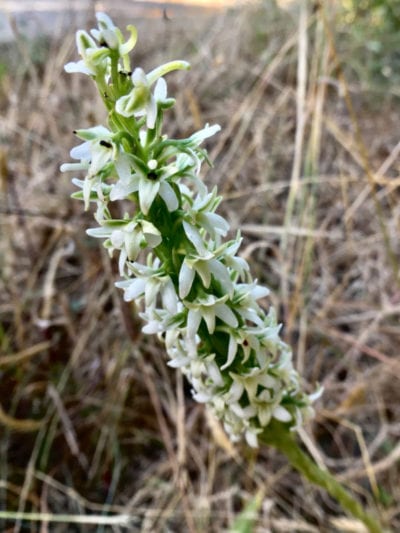 What are rein orchids? In the scientific world of plant nomenclature, rein orchids are known as either Piperia elegans or Habenaria elegans, although the latter is somewhat more common. However, most of us know this lovely plant as simply rein orchid plant, or sometimes piperia rein orchids. Read on to learn more about them.

Rein orchid plants are best enjoyed in their natural environment and they’re almost certain to die if you attempt to transplant wild plants into your garden. Like many terrestrial orchids, rein orchids have a symbiotic relationship with tree roots, fungus, and decaying plant debris in the soil and they won’t grow in a habitat that isn’t just right.

If you see rein orchids, don’t pick the flowers. Removing the blooms disturbs the root system and also removes the developing seeds, which prevents the plant from reproducing. Many orchids are protected and removing or picking them is illegal. If you want to take an orchid home, take a picture – from a distance. Tread lightly and don’t compact the soil around the plants. Without meaning to, you may kill the plant.

If you want to grow rein orchids, inquire at a grower that specializes in native orchids.

Where Do Rein Orchids Grow?

Piperia rein orchids are native to the western United States, particularly the Pacific Northwest and California. They are found throughout much of the United States and Canada, as far north as Alaska and as far south as New Mexico.

Rein orchid plants prefer damp ground, sometimes to the point of bogginess. They are found in both open and shady areas, usually in sub-Alpine foothills such as the Columbia River Gorge in the foothills of the Cascade Mountains.