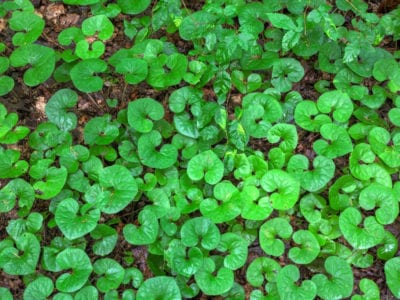 Found throughout the world, but primarily in the shady woods of Asia and North America, wild ginger is a perennial not related to the culinary ginger, Zingiber officinale. There are a wide variety of species and cultivars to choose from, making the question, “Can you grow ginger plants in the wild?” an easy and emphatic “yes.”

Wild ginger plants (Asarum and Hexastylis species) are 6 to 10 inches (15-25 cm.) tall with a spreading habit of 12 to 24 inches (31-61 cm.), depending on the variety. Wild ginger plants tend to grow moderately slowly and are non-invasive with evergreen, kidney-shaped or heart-shaped leaves. Versatile and easily grown, growing wild ginger is an excellent choice in a woodland garden, as a shade ground cover or mass plantings.

Ginger plants in the wild have interesting, although not particularly lovely, spring blooms (April through May) that are hidden at the base of the plant among the stems. These flowers are about an inch (2.5 cm.) long, shaped like an urn, and are pollinated by ground insects such as ants.

Ginger plants in the wild spread via rhizomes and can be easily divided in the early spring by slicing through the surface growing rhizomes. Wild ginger may also be propagated by seed, although patience is definitely a virtue here as the wild ginger plant takes two years to germinate!

Grow wild ginger plant under trees and in front of taller plants in shaded areas to create a low maintenance, naturalistic landscape. One issue that might arise from these generally moist areas of the garden is damage to plants as the result of snails or slugs, especially in the early spring. The signs of damage on wild ginger plants will be big, irregular holes in foliage and slimy mucus trails. To battle against this prominent damage, remove mulch and leaf detritus near the plants and spread diatomaceous earth around the plants. If you aren’t squeamish, look for slugs a few hours after dark using a flashlight and remove them by hand picking or create a trap of shallow, beer-filled containers placed in a hole in the soil with the rim level to the soil.

Native to eastern North America, the Canadian wild ginger is an example of a wild ginger variety that has historically been eaten. Early settlers used this Asarum canadense fresh or dried as a substitute for culinary ginger, although they were probably ingesting it more for its medicinal uses rather than in a gingered chicken stir fry. The roots of this plant were eaten fresh, dried, or candied as an expectorant and were even used as a contraceptive tea by Native Americans. Caution should be taken with this wild ginger however, as it may cause skin rashes in some people.

Just as the Canadian wild ginger may cause skin rashes, the European ginger (Asarum europeaum) acts as an emetic, so its ingestion should be avoided altogether. This European native is an attractive evergreen species which, as well as the Canadian species, is hardy in USDA zones 4 through 7 or 8.

A variegated variety, the Mottled wild ginger (Asarum shuttleworthii) is a less hardy (zones 5 to 8) plant native to Virginia and Georgia. This wild ginger and some other species are now in the genus Hexastylis, which include ‘Callaway,’ a slow, matted ginger with mottled foliage and ‘Eco Medallion,’ a silver-leaved compact wild ginger plant. Also counted among this genus are larger types ‘Eco Choice’ and ‘Eco Red Giant.’

Printer Friendly Version
Read more about Ornamental Ginger
Next>
Did you find this helpful? Share it with your friends!
FacebookTweetPinEmail
Related Articles
Newest Articles
You might also like…
Additional Help & Information