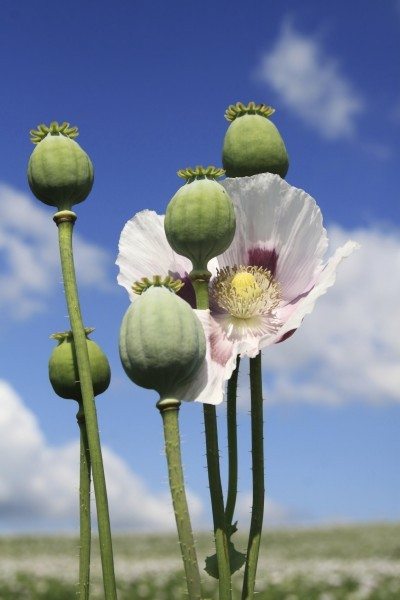 I love poppies and, in fact, have some in my garden. Looking much akin to opium poppies (Papaver somniferum) with one small difference, they are legal. These beautiful flowers are steeped in culture, commerce, politics and intrigue. Curious about opium poppy laws, plants and flowers? Keep reading to find out some fascinating opium poppy information.

The Poppy Control Act of 1942 was repealed in the 70’s, but it is still illegal to grow poppies from which narcotics can be made. I know they are gorgeous and it seems a shame. In fact, there are many varieties that are offered in gardening catalogs. That is because it isn’t illegal to sell or purchase seeds. They have a minimal amount of the opiate.

So it’s legal to get a poppy seed bagel, for instance. Do keep in mind that the ingestion of poppy seeds may affect a drug test if you need one for, ahem, whatever reason. You can test positive for heroin or opium if you had a lemon poppy seed muffin with your Starbucks coffee. Just FYI. The chemical thebaine is what is found in drugs, or you, when tested for drugs created from opium.

NATO has had to deal with a huge problem in Afghanistan as many local people rely on the opium poppy flowers for their livelihood. Stop the people from growing and harvesting the illegal plants and they have no way to feed their families. New programs and retraining have had to be implemented and are still ongoing.

Cultivation of opium poppy plants is illegal and a federal crime. Even having dried opium poppy seed pods or stalks on your property is a crime. Don’t worry; there are plenty of other poppies that are legal to grow:

Steer clear of the Papaver somniferum or the double flowered P. paeoniflorum varieties unless you want to do time.

For centuries, P. somniferum has been known to produce alkaloids that can be used for pain treatment. These alkaloids, some 80 different ones, are harvested from the opium poppy by making a small slit along the pod of the plant and collecting the secreted latex. The latex is then dried and processed to be used for medicines.

According to opium poppy information I found on the internet, opium and all refined opiates are derived from P. somniferum: morphine (up to 20%), thebaine (5%), codeine (1%), papaverine (1%) and narcotine (5-8%).

Morphine, interestingly, is named after Morpheus, the god of sleep. Somniferum means “to sleep” in Latin. Have you ever seen the Wizard of Oz? Opium poppies were used by the Wicked Witch to put Dorothy and her companions to sleep before they reached the Emerald City. Remember the Wicked Witch of the West chanting, “Poppies. Poppies will put them to sleep. Sleeeep. Now they’ll sleeeep.” Creepy.

If you want to see if you look good in orange, poppies whether legal or illegal, are grown in much the same manner. These erect annuals bloom in late spring at a height of about 24-36 inches and come in a multitude of hues. Hardy to USDA zones 8-10, plant seeds in full sun and well-drained soil in the fall for spring blossoms.

DISCLAIMER: As to its legality here in the U.S. and whether or not the plant can be grown in gardens, there seems to be much debate. Apparently, individual states are free to set laws regarding this, which would explain why it may be illegal to grow in one area and legal in another. That said, it can only be grown for ornamental purposes or the seed and NOT for the opium so it is a matter of intent. We would strongly recommend that anyone considering adding this plant in their garden to first check with their local extension office or law ordinance to see if it’s legal to grow or not. Otherwise, it’s better to be safe than sorry and simply avoid planting it.