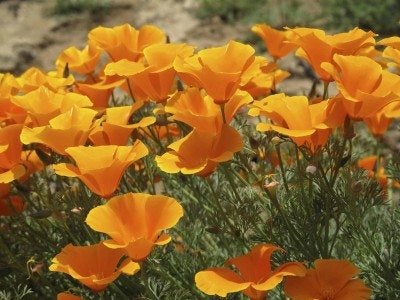 The California poppy (Eschscholzia californica) is a naturally seeding colorful wildflower. It is native to California but has been transported to other areas of the country mechanically and agriculturally. In some regions it is considered a weed because of the plant’s stoic and tenacious nature; however, in its native range, the California poppy plant is the state’s flower and a symbol of the Golden State.

If you’ve ever been through California and seen a hillside of bright orange blooms, you are familiar with the California poppy plant. Knowing how to grow California poppies will provide the gardener with a foolproof plant and a wild native that is perennial and easy to maintain. The cheery, eye-popping flowers will enliven any scenario, but be cautious. The plant has a deep taproot and ferociously reseeds, making it a possible pest plant in some locations.

The California State Floral Society selected the California poppy as the state flower in 1903. Interestingly, the plant had been an important herbal prior to its state elevation. The indigenous people used it for cosmetics, as a medicinal, and the seeds were used in cooking. California poppy info would not be complete without addressing its cousin, the opium poppy. The California poppy does have a mild sedative property but it does not have nearly the same effect as opium because it carries a different class of alkaloids. The other is also illegal to grow.

California poppy is remarkably drought-tolerant and quickly lays down mats of blue-green, lacy foliage and orange blooms. The combined colors form a rich mosaic across much of California’s highways. The plant is easy to establish by seed, as are all poppies, and thrives in full sun locations with highly fertile but well-drained soil.

California poppy is useful as a container plant as well as a meadow or wildflower addition. It is an excellent xeriscape specimen and will excel even in sandy soil. Very little effort needs to be expended on the gardener’s part in the care of California poppy. It is a hardy and reliable performer with few needs outside occasional watering when young.

Interestingly, California poppies close their nodding heads when it is overcast, raining, and at night. This doesn’t signal weakness but is a protective mechanism for this heat-loving plant. The poppy needs little special care except perhaps deadheading, if you are up to the task. This will help prevent over-seeding and keep patches of the plant looking attractive.

This hardy specimen is not particular regarding soil type but does need good drainage for best results. It is also remarkably tolerant of any lighting. Growing California poppies is an excellent choice for the novice gardener due to the plant’s flexible nature. As long as you are aware of its possible invasive nature and can manage any excess plants, there are few more visibly rewarding and low maintenance flowers for the garden.