What To Do With Rose Hips: How To Harvest Rose Hips For A Tasty Treat 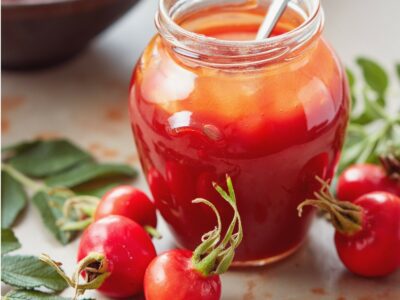 Once the petals fall from roses, the flower leaves behind the hips. Rose hips are ornamental, especially once they turn a golden orange hue. Harvesting rose hips for tea is a very common and has a long history steeped in tradition, but you can eat the hips as well. There are plenty of nutritional rose hips benefits and the taste is reminiscent of a citrus preparation.

Rose hips form on many of our species, but the rosa rugosa hips are one of the largest and tastiest. Wild rose hips have been used for centuries in many recipes. They can be used fresh or save dried rose hips for off season enjoyment. High in vitamins and minerals, rose hips add a delightful fragrance and flavor to daily recipes.

Rose hips are the ripened ovary of the rose flower. It is essentially a fruit, and is popular with birds and other wild animals. Many varieties of rose produce hips, which vary in size and color. Wild rose hips are some of the largest and tastiest. Hybrid roses are repeat bloomers and need to be deadheaded to promote more blooms. Wild and shrub roses are not deadheaded, allowing the hips to develop. Ripe hips are orange to red, plump, and smooth when ready to harvest. They are useful for humans too. The fruit is tangy, citrusy, and delightful. The fruit may be cooked or dried for different uses.

Rose hips are also called rose haw, and are a great source of Vitamin C. Unsurprisingly, the citrus flavor derived from the hips is common in plants high in Vitamin C. Hips may be preserved, used fresh or dried for tea. Common preparations are jams, jellies, syrup, and purees. Late season is the time for harvesting rose hips. Only use fruit that has not been exposed to pesticides or herbicides. Wash and cut the fruit, then steep in water. This is a simple tea. Or you can add other fruit like apples, and sugar boiled down to a syrup which you can strain. Jams and jellies follow a similar approach to traditional fruit preparations.

After harvesting rose hips use them fresh or save them for later. Preserving the hips is one option, but they may also be dried. Wash and dry the hips, then either dry them whole or cut in half. Spread the hips on screens, or use a dehydrator or the oven on a very low setting. Make sure they are entirely dry before storing to prevent mold from forming. You can store them as is, or grind them in a mortar and pestle or other device. Steep the dried hips in a tea ball for instantly fresh, tangy tea.

Printer Friendly Version
Read more about Roses
<Previous
Did you find this helpful? Share it with your friends!
FacebookTweetPinEmail
Related Articles
Newest Articles
You might also like…
Additional Help & Information