How Much To Water Roses During Droughts 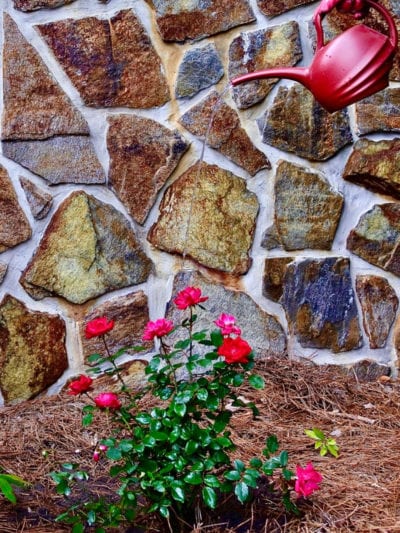 In times of drought and as a water conserving measure on my part, I will often conduct some moisture meter tests around the rose bushes when my records show it is time to water them again. I push the water meter probe down all the way into the soil surrounding each rose in three different locations to see what the moisture readings of the soils are.

How Much to Water Roses During Droughts

These readings will give me a good indication of whether I really need to water the rose bushes then, or if the watering can wait a few days. By conducting the moisture meter tests, I am making sure the rose bushes have good soil moisture down in their root system zones, thus not watering when the need really is not quite there yet.

Such a method conserves the precious (and at such drought times high priced!) water as well as keeping the rose bushes doing well in the moisture uptake department. When you do water, I recommend doing so by hand with a watering wand. Make soil bowls or catch basins around each plant or rose bush out at their drip line. Fill the bowls up with water, then move on to the next. After having done five or six of them, go back and fill the bowls again. The second watering helps push the water deeper into the soil where it will last longer for the plant or bush.

Use the “Mulch Tool” top help in times of drought as well. Using a mulch of your choice around the rose bushes will help hold in the priceless soil moisture as well. I use either a shredded cedar mulch or pebble/gravel mulch around all of my rose bushes. Usually, you will want a 1 ½ to 2 inch (4-5 cm.) layer of mulch in order for it to perform as desired. In some areas, you will want to stay with something like shredded cedar mulch, as the pebble or gravel mulch may not perform as well as it does for me here in Colorado (USA) due to more extreme heat conditions. When using the gravel/pebble mulch, stay away from lava rock and dark colored gravels/pebbles, and instead use lighter tones such as light gray or even a light pink to off white (such as Rose Stone).