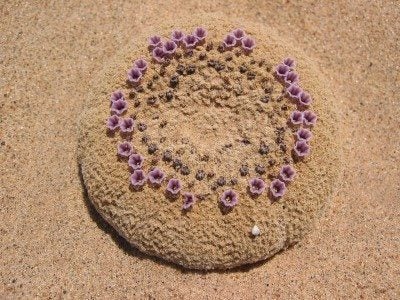 If you want a plant that will astound you, check out sandfood. What is sandfood? It is a unique, endangered plant that is rare and hard to find even in its native regions of California, Arizona, and Sonora Mexico. Pholisma sonorae is the botanical designation, and it is a parasitic perennial herb that is part of the dune ecosystem. Learn about this little plant and some fascinating sandfood plant info like, where does sandfood grow? Then, if you are lucky enough to visit one of its regions, try to find this elusive, amazing plant.

Rare and unusual plants are found in most natural communities and sandfood is one of them. Sandfood relies upon a host plant for food. It has no true leaves as we know them and grows up to 6 feet (2 m.) deep into sand dunes. The long root attaches to a nearby plant and pirates that specimen’s nutrients.

During a walk along the California coast, you may spot a mushroom shaped object. If it is decorated on top with tiny lavender flowers, you have probably found a sandfood plant. The overall appearance resembles a sand dollar with flowers sitting atop a scaly, thick, erect stem. This stem extends deeply into the soil. The scales are actually modified leaves that help the plant gather moisture.

Due to its parasitic nature, botanists had assumed the plant took moisture from its host. One of the fun facts about sandfood is that this has since been found to be untrue. Sandfood gathers moisture from the air and only takes nutrients from the host plant. Perhaps this is why the sandfood doesn’t affect the vitality of the host plant to a large degree.

Dune ecosystems are delicate communities with a finite supply of flora and fauna which can flourish in the sandy hills. Sandfood is an elusive plant that is found in such areas. It ranges from the Algadones Dunes in southeastern California to parts of Arizona and down into El Gran Desierto in Mexico.

Pholisma plants are also found in rocky thorn scrub, such as that in Sinaloa Mexico. These forms of the plant are called Pholisma culicana and thought to be located in a different region due to plate tectonics. The Pholisma plants found in dune areas thrive in loose sandy soils. The most common host plants are Desert Eriogonum, fan-leaf tiquilia, and Palmer’s tiquilia.

Sandfood is not strictly parasitic since it doesn’t take water from host plant’s roots. The main fleshy part of the root system attaches to the host root and sends up scaly underground stems. Every season a new stem is grown and the old stem dies back.

Very often the cap of the sandfood is covered entirely by sand and the entire stem spends most of its time buried in the dune. The inflorescences arise from April to June. Flowers form in a ring on the outside of the “cap.” Each bloom has a hairy calyx with grayish white fuzz. The fuzz protects the plant from sun and heat. Flowers develop into tiny fruit capsules. The stems were historically eaten raw or roasted by regional people.