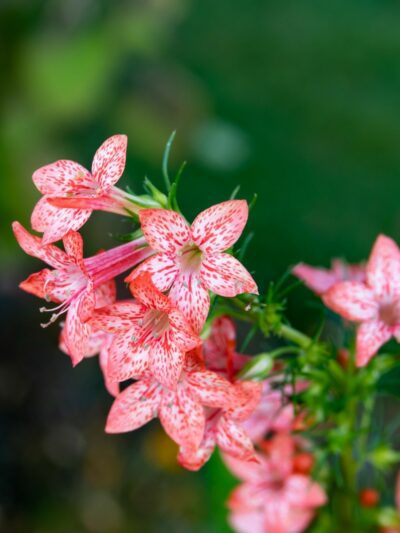 What is a Red Texas Star Flower?

Also known as scarlet gilia, red Texas star, and Texas plume, the biennial or short-lived perennial, grows in an erect, unbranched stalk from 2 to 6 feet (.61 to 1.2 m.) tall. In mid-summer, each stem is topped with red, tubular flowers that flare outward with star-shaped tips and red and yellow inside. Blooming from the top downward, red Texas star makes a showy statement, especially when massed.

The bright, nectar-rich flowers are irresistible to hummingbirds. Plant standing cypress near other hummingbird attracting plants such as:

Red Texas star plant performs best when grown from seed. Plant in the fall by raking over loose soil. The next spring expect only green foliage in a feathery rosette. The second year, red Texas star will produce the flowering stalk and the tubular red blooms. To keep the biennial flowers coming, plant again in the second year. They also reseed freely, so there should be a constant supply of the red flower spikes.

When the stalk is finished blooming, cut it back and new stems will grow and bloom. Then, allow seeds to form so there will be an ample supply of plants. For saving seed or sharing, let the seeds completely mature before collecting.

There are more reasons for growing red standing cypress. The plant is not bothered by any serious pests or diseases, nor is it favored by deer. Plus, standing cypress is drought tolerant once established.