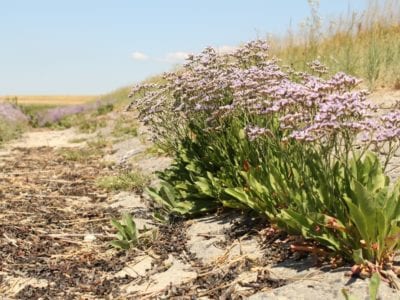 What is sea lavender? Also known as marsh rosemary and lavender thrift, sea lavender (Limonium carolinianum), which has nothing to do with lavender, rosemary, or thrift, is a perennial plant often found growing wild in salt marshes and along coastal sand dunes. Sea lavender displays red-tinted stems and leathery, spoon-shaped leaves. Delicate purple blooms appear in summer. Let’s learn about growing sea lavender, including the importance of protecting this beautiful coastal plant.

If you’re interested in growing sea lavender, Limonium plants are readily available online. However, a knowledgeable local nursery can advise you about the best Limonium varieties for your area.

Don’t attempt to remove plants from the wild because sea lavender is protected by federal, local, or state laws in many areas. Development along coastal areas has destroyed much of the natural habitat, and the plant is further threatened by overharvesting.

Although the blooms are beautiful and highly valued by plant enthusiasts and florists, picking the flower prevents the plant from expanding and forming colonies, and removing the plant by the roots destroys the entire plant. The more commonly grown annual statice plants, which are related to sea lavender and may even share its common name, are a good substitute.

How to Grow Sea Lavender

Water new plants regularly to establish a deep, healthy root system, but only occasionally once the plant is established, as sea lavender is drought tolerant.

Divide sea lavender every two to three years in early spring but dig deeply to prevent damage to the long roots. Sea lavender is sometimes difficult to divide.

Taller plants may require stakes to remain upright. Sea lavender turns brown in fall and winter. This is normal and isn’t cause for concern. Feel free to remove dead leaves to make room for new growth in spring.