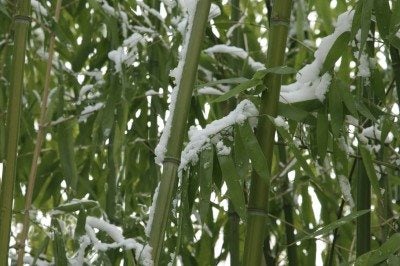 When I think of bamboo, I recall the forests of bamboo on a Hawaiian vacation. Obviously, the weather there is consistently mild and, thus, the cold tolerance of bamboo plants is nil. Since most of us don’t live in such a paradise, growing cold hardy bamboo plants is a necessity. What are some cold weather bamboo varieties suitable for the colder USDA zones? Read on to find out.

Bamboo, in general, is a fast-growing evergreen. They are two ilks: Leptomorph and Pachymorph.

The hardy bamboo varieties of Fargesia are native understory plants found in the mountains of China under pines and along streams. Until recently, only a couple of species of Fargesia have been available. F. nitida and F. murieliae, both of which flowered and subsequently died within a five year period.

Today, there are a number of hardy bamboo varieties in the genus Fargesia that have the highest cold tolerance for bamboo plant cultivars. These cold tolerant bamboos create gorgeous evergreen hedges in shade to partial shaded locations. Fargesia bamboos grow to a height of 8 to 16 feet (2-5 m.) tall, depending upon the variety and are all clumping bamboos that do no spread more that 4 to 6 inches (10-15 cm.) per year. They will grow almost anywhere in the United States, including the southern to southeast climactic zones where it is very hot and humid.

With these new varieties of cold hardy bamboos, everyone can bring a little piece of paradise into their home garden.

Printer Friendly Version
Read more about Bamboo
<PreviousNext>
Did you find this helpful? Share it with your friends!
FacebookTweetPinEmail
Related Articles
Newest Articles
You might also like…
Additional Help & Information