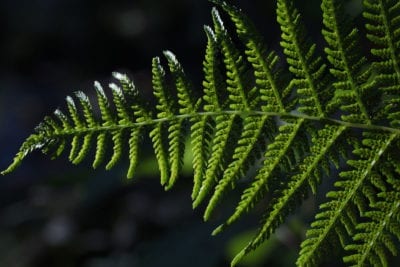 The Woodwardia giant chain fern (Woodwardia fimbriata) is the largest American fern, reaching towering heights of 9 feet (3 m.) in the wild. It’s a native of the Pacific Northwest, where it’s often found growing among the giant redwood trees.

Named for its sporangia pattern resembling a chain stitch, Woodwardia chain ferns have high-arching fronds with delicate, dark green blades. Their attractive, evergreen leaves remain intact until the new spring fronds begin to uncurl. They make an eye-catching addition to shady spots in the garden where year-round foliage is desired. Best of all, giant chain fern care is relatively simple.

The largest and only evergreen species of the Woodwardia genus, this fern plant is also known as western chain fern and giant chain fern. While the fern can grow large, it remains a much smaller height of around 4 to 6 feet (1 to 2 m.) and width of 3 to 8 feet (1 to 2.5 m.) in cultivation.

As with many ferns in the garden, this one prefers full to partial shade conditions with rich, loamy, and acidic soil – preferably on the moist side, though it’s fairly tolerant of drought once established. Hardy to USDA zones 8 to 9, the fern is not tolerant of frost and must be grown in containers brought inside in regions outside their hardiness.

In the wild, the Woodwardia giant chain fern is considered a rare species. Washington state classifies chain ferns as “sensitive,” indicating the species wild population is vulnerable or declining in numbers. Collecting spores from wild chain ferns, purchasing cultivated plants from a nursery, or trading with another gardener are the best methods for acquiring endangered native plants.

The best time to collect spores is in the summer. The spores of the Woodwardia giant chain fern can be found on the underside of the fronds. Ripe spores are black and can be collected by securing a plastic bag around the frond and gently shaking.

Plant the spores in a sterilized container using a fern medium, such as ½ peat moss and ½ vermiculite. Keep the soil moist and covering it with plastic is recommended. Place the container in a dark location for a couple of days. It will take chain ferns several years to reach mature heights when started from spores.

Giant chain ferns can also be propagated by division in the early spring. Whether you receive your fern from a friend or purchase it at a nursery, your new fern requires shallow planting in a shady or partially shady location. Woodwardia chain ferns prefer rich and loamy acidic soil.

When planting, bury the root ball no deeper than 1 inch (2.5 cm.) with the crown level with the soil line. Mulch with organic materials to retain moisture and reduce competition from weeds. Keep your new fern moist, but not soggy until it is established. Applying a nitrogen-based fertilizer annually can help your fern reach its full height potential.

Removing spent fronds to improve the fern’s appearance is the only other giant chain fern care that may need to be done. Woodwardia chain ferns are long-lived and with proper care should provide years of gardening pleasure.