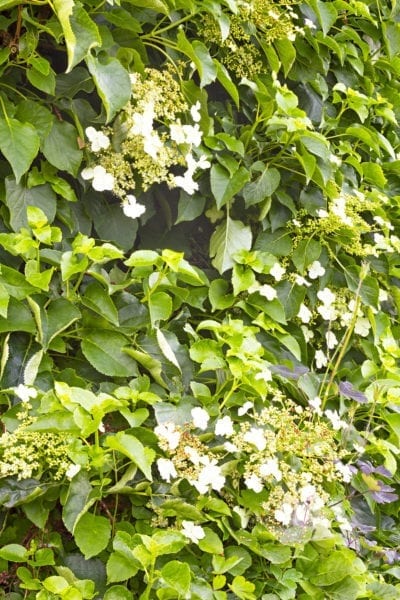 Climbing hydrangeas feature large, fragrant clusters of white flowers that bloom in late spring and summer against a backdrop of dark green, heart-shaped foliage. These massive vines readily climb columns, trees, and other supporting structures. A climbing hydrangea plant grows 30 to 80 feet (9-24 m.) tall, but it tolerates pruning to shorter heights. You can also grow it as a shrub.

Climbing hydrangeas (Hydrangea anomala subsp. petiolaris) are large, heavy vines that need substantial support. A climbing hydrangea plant clings to the supporting structure by two methods — twining vines that wrap themselves around the structure, and aerial roots that grow along the main stem cling to vertical surfaces.

How to Care for Climbing Hydrangea

Growing climbing hydrangeas is easy. The plants are hardy in USDA plant hardiness zones 5 through 7. Climbing hydrangeas need a rich, moist soil that is well-drained. If your soil needs improvement, dig in a generous amount of compost before planting.

The vine grows well in full sun or partial shade. In areas with hot summers, provide some afternoon shade. When growing climbing hydrangeas against a wall, choose a northern or eastern exposure.

How to care for climbing hydrangea isn’t difficult either. Water the vine regularly to keep the soil moist. A layer of mulch around the base of the plant will help the soil retain moisture and help keep weeds at bay.

Feed the plant in late winter or early spring, just before new leaves begin to bud and again in summer when the flowers bloom. Use compost or a slow-release fertilizer.

Prune the climbing hydrangea plant in late spring or early summer to remove dead, diseased or damaged branches. Remove crossed branches that may rub against each other; rubbing creates an entry point for insects and disease.

How to Grow a Climbing Hydrangea as a Shrub

Without a supporting structure, climbing hydrangea plants form a mounding, arching shrub that grows to a height of 3 to 4 feet (.9-1.2 meters). It is slow to become established, but later spreads at a rapid pace.

The aerial rootlets that grow along the main stem take root wherever they make contact with the soil, and this potential to spread makes a climbing hydrangea plant an excellent choice as a ground cover for a large area.

Printer Friendly Version
Read more about Climbing Hydrangea
Next>
Did you find this helpful? Share it with your friends!
FacebookTweetPinEmail
Related Articles
Newest Articles
You might also like…
Additional Help & Information