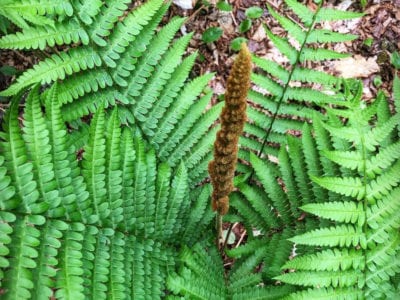 Cinnamon ferns are tall, stately beauties that grow wild in swamps and on moist mountain slopes of eastern North America. They reach heights of 4 feet (1 m.) or more with two types of fronds that have distinctly different colors and textures. This attractive and interesting fern is an asset to any shady landscape. Continue reading for more cinnamon fern plant info and learn how to grow a cinnamon fern in the garden.

Cinnamon ferns (Osmundastrum cinnamomeum) produce two distinctly different types of fronds. Fertile, plume-like, cinnamon colored fronds grow at the center of the plant, giving way to the plant’s name. They are surrounded by larger, green, sterile fronds. The contrast between the two results in an appealing, multi-dimensional plant.

Cinnamon ferns have short creeping rhizomes that can be divided into two or more plants. Cut the dense, fibrous rhizomes apart between the crowns with a sharp knife or hacksaw. Trim back damaged or wilted fronds and remove every third frond from the divisions to make it easier for the plant to recover from the loss of root tissue. Replant the divisions right away and water deeply.

Cinnamon fern care depends on giving the plant plenty of water. Their native habitat is within streambeds, coastal areas, and swampland and their range extends from Texas and Florida to as far north as Newfoundland. They can easily adapt to garden conditions but only if they are kept moist. How and when to plant cinnamon ferns in the garden is also an important part of cinnamon fern care.

When to Plant Cinnamon Ferns

You should plant cinnamon ferns in spring after the last expected frost of the season. The spacing depends upon their use in the garden. To add a tropical appeal to stream banks and swampy areas, plant them at 6 foot (2 m.) intervals.

In the garden, plant them 2 feet (61 cm.) apart to create a backdrop for spring and summer annuals and wildflowers. Cinnamon ferns make excellent specimen plants or accents when planted at the base of a tree.

How to Grow a Cinnamon Fern

Growing cinnamon ferns in the garden can add unique interest to the area. For best results, cinnamon ferns thrive in deep shade or filtered sunlight. They can tolerate more sun when grown in wet soil.

Keep the soil around the ferns moist at all times. To avoid constant watering, plant them in soggy or boggy areas.

Although cinnamon ferns adapt to a wide range of soil types, growing cinnamon ferns is easiest in a moist soil that is rich in organic matter. Work plenty of compost into sandy or clay soils before planting.