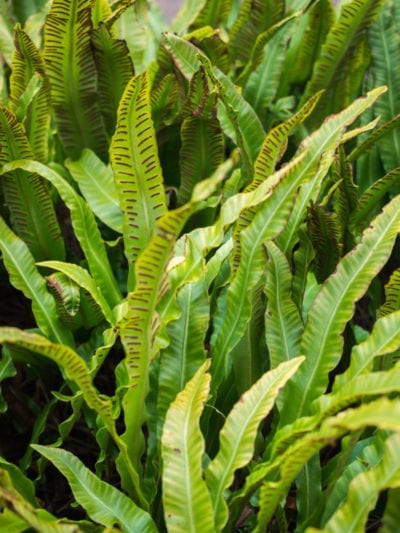 The hart’s tongue fern plant (Asplenium scolopendrium) is a rarity even in its native ranges. The fern is a perennial that was once prolific in cool North American ranges and high hill lands. Its gradual disappearance is probably due to human intervention and expansion, which has removed or destroyed much of its natural growing zones. It has a limited distribution today, but some nurseries specialize in hart’s fern cultivation and these plants are part of an important reintroduction to the environment.

You will have to be very lucky to find one of these plants for home cultivation. Whatever you do, don’t remove a wild plant! Growing a hart’s tongue fern in the landscape is an attractive notion, but harvesting the native plants will only further deplete their territory and help eradicate them from native environs.

This fern is remarkably attractive with long, glossy, untoothed evergreen fronds. Leaves are 8 to 16 inches (20-40 cm.) in length and strap-like with an almost tropical appearance. The plants can be found in Michigan and parts of New York on north or east-facing slopes with plenty of rock cover, and at the edges of mossy tree zones.

They are often accompanied in the environment by bryophytes, other ferns, mosses, and sugar maple trees. The leaves stay evergreen all year and plants can develop up to 100 leaves per root zone, although 10 to 40 are more common.

The fern grows in shaded, cool areas with protection from environmental influences. Primarily found in northern forests, the plant requires moisture and is often found clinging to cracks in white limestone and other rocky regions. It is epipetric and needs just a few inches (8 cm.) of rich humus in which to grow.

Hart’s tongue fern plants grow from spores that start out asexual in the first year and give rise to the next generation, which has sex organs and is called a gametophyte. The plants are slow-growing, and the process is difficult to mimic in culture. Mature plants will produce swollen bases which can be removed and held in a bag of moist peat until they form rootlets.

Due to the plant’s sensitivity to environmental influences, organic methods are necessary to take care of hart’s tongue ferns. Plant the fern in rich soil in a partially sunny to full shade location. A sheltered location is best, but you can also situate the fern in a rockery where it will feel right at home.

Enrich the soil before planting with compost, leaf litter, or another organic amendment. Slightly acidic soil is the best medium for hart’s tongue fern care. Water the plant during the first season regularly and thereafter when temperatures are unusually dry.

Exposure to pesticides, insecticides, and fungicides must not occur when you take care of hart’s tongue ferns due to their intolerance of non-organic chemicals.