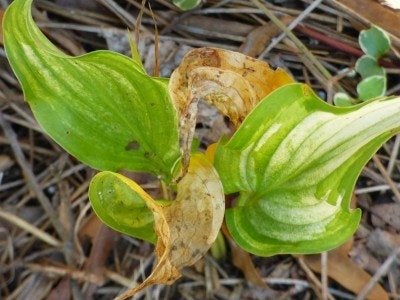 One of the beautiful features of hostas are their rich green leaves. When you find your hosta plant leaves turning yellow, you know something is wrong. Yellowing leaves on hosta doesn’t necessarily mean disaster, but it is definitely time to investigate. The problem could be anything from too much sun to incurable diseases. If you want to find out why hosta leaves turn yellow, read on.

Hosta leaves turn yellow for a wide variety of reasons, and it is important for you to figure out the particular reason that applies to your plant.

Perhaps the easiest situation to remedy is when yellow hosta leaves indicate too much sun. Hosta are plants that grow best in partial shade or even full shade. In fact, they are regular fixtures in the shade garden. If you grow them in full sun, you can expect yellow hosta leaves. The foliage turns yellow and scorches at the margins. When you see hosta plant leaves turning yellow because of too much sun, it is termed hosta scorch.

Hosta scorch is even more pronounced if the plant is also grown in poor soil. The plant prefers soil rich in organic matter that will hold water. During a drought, or when dried out in full sun, the hosta leaves become pale and the margins scorch. You can give the plant temporary relief by watering well early in the day, but the better and more permanent solution is to transplant the hosta to a shaded site in high organic matter soil.

When yellow hosta leaves indicate disease, the options for treating the problem are more difficult. When you see yellowing leaves on hosta, the plant may have petiole rot, caused by the fungus Sclerotium rolfsii var. delphinii. The earliest symptoms are yellowing and browning of the lower leaf margins. If you see brown, mushy decay and white fungal threads or fungal fruiting structures about the size of mustard seeds at the base of the petiole, your plant probably has this disease.

You cannot save plants infected with petiole rot. Prevent the problem by inspecting young plants carefully before you plant them. You should also remove and destroy all infected plants and remove and replace the soil to 8 inches (20 cm.).

Other fungal diseases, rots, and virus diseases that cause yellowing leaves on hosta are equally impossible to cure. For fusarium root and crown rot, bacterial soft rot, hosta virus X and other viruses, all you can do is remove the plants and destroy them, trying not to spread the disease to other plants.

Since fungal diseases live in the soil and attack hosta at or below the surface of the soil, you may need to kill the fungus by solarizing the soil with black plastic. Be sure to keep your garden tools clean, keep the area free of debris, and avoid transplanting diseased plants. Other fungal diseases, such as root and stem rot, are generally caused by excessive moisture and are usually deadly. Be careful not to overwater and don’t limit air circulation by crowding the plants. Water your hosta at the soil level to keep the leaves dry.

Foliar nematodes are microscopic worms that live inside the leaves. Symptoms, which are usually first noticed in early summer, begin as a yellow discoloration that later turn into brown streaks between the leaf veins. Keep an eye on the plant and remove affected leaves immediately to prevent the pests from spreading.

Once the growing season dies down, hostas will naturally begin to enter dormancy. When this happens, you may notice yellowing hosta leaves. This is perfectly normal and nothing to worry about. Once the leaves have completely died back in fall, you can cut the plant back.