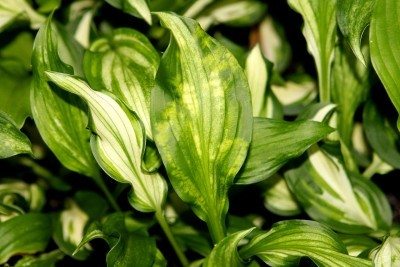 Hostas have become garden favorites in recent years, and it isn’t difficult to figure out why. Available in a huge variety of sizes, colors, and forms, hostas provide color and interest in those difficult, shady garden spots. Hostas are relatively trouble-free, but they can be affected by various diseases. Read on to learn more about a few of the most common hosta plant diseases and treatments.

Diseases of hosta plants generally include both fungal and viral issues, as well as problems caused by nematodes in the soil.

Anthracnose – This disease plagues not only hostas but many other types of plants, including trees and tomatoes. Although it usually isn’t fatal, the large, pale brown spots, small black splotches, and tattered appearance can definitely detract from the appearance of the plant. A fungicide may help prevent the disease. Be sure hostas are spaced widely enough to provide air circulation; anthracnose thrives in damp conditions.

Fusarium root/crown rot – This fungal disease usually appears in late spring, when leaves turn yellow and brown before they die and drop from the plant. Stems near the soil line often display a dry, brown or black decay. Infected plants should be removed, as plants with crown rot normally cannot be treated.

Sooty mold – Common hosta diseases include sooty mold, which is often found on hostas planted under trees affected with sap-sucking pests, such as scale or aphids. The pests produce a sugary excrement, which drops on the plant and attracts the dark, unattractive mold. Sooty mold is unsightly but usually harmless. However, it can block light, which can affect the health of the plant. The fix? Wash the guck off with warm, soapy water and treat the plant for pests.

Hosta virus X – Early symptoms of hosta virus X include green or blue spots that give the leaves a mottled appearance. The symptoms look normal at first, but the leaves may become twisted, puckered, or distorted as the disease progresses. Unfortunately, there is no cure for this viral disease, which is easily spread from plant to plant on garden tools or hands. Plants should be destroyed as soon as possible. Treating hosta diseases such as Hosta virus X requires the cleaning and sanitizing of all your garden tools.

Nematodes are minuscule worms that live in the soil or inside the tender hosta leaves. The foliage turns yellow when the nematodes are feeding in early summer. As the season progresses, the leaves develop brownish streaks between the veins. Eventually, entire leaves turn brown and drop from the plant. Affected leaves should be destroyed. To prevent the nematodes from spreading, water the plant at the soil level to keep the leaves dry.