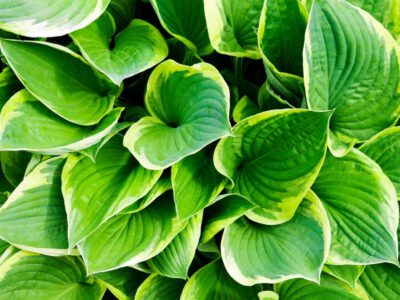 Hosta plants are popular perennials grown for their foliage. Generally, these carefree plants, which thrive in shady locations, suffer from few problems. However, occasional problems with hostas do occur, so knowing what to look for is important in order to treat or prevent further hosta problems.

What causes holes in hosta leaves? This is one of the most common questions associated with hosta plants. Essentially when bugs are eating hostas, slugs or snails are usually to blame. These nighttime foragers are probably considered the most common of hosta pests, eating small holes in the leaves. Silvery colored slime or snail trail throughout the garden area is a good indication of their presence. Control of these slugs may include the use of beer traps, which they crawl into and die.

Another insect pest that chews hosta leaves is the adult black vine weevil. Signs of this insect are irregular notches along the outer edges of leaves. Their larvae also pose a problem by feeding on the crown and roots of hosta plants, resulting in yellow, wilted foliage.

Nematodes, which are microscopic roundworms, typically cause disease by infecting hosta plants much like fungi or bacteria. As with fungal infections, they thrive in moist conditions. Nematodes often feed within the leaves, producing brown areas between the veins, which result in an almost striped appearance. This generally occurs in late summer. Affected plants should be destroyed. You can prevent most nematode attacks by providing adequate spacing between plants, avoiding wet foliage through the use of soaker hoses, and removing and destroying all infected plants.

Think just bugs are eating hostas? Think again. Deer and rabbits will oftentimes feast on hosta plants. In fact, deer may leave only stalks where beautiful hosta foliage once was while rabbits usually prefer nibbling on the young shoots.

Anthracnose is one of the most common diseases affecting hosta plants. This fungal disease thrives in warm, wet weather. The most obvious sign of anthracnose includes large, irregular spots surrounded by a dark border. Once the centers of the spots fall out, the leaves may look torn and can sometimes be mistaken for pest damage. As with nematode prevention, try to keep a good distance between plants and avoid overhead watering which results in wet foliage. The use of fungicide spray in spring may be helpful as well. However, look for those that specifically target this disease.

Another fungus that affects hosta plants is Sclerotium blight. This disease first targets the lower leaves but then quickly spreads to the upper ones causing a path of wilted, brown leaves. In addition, there is usually a fluffy, white mass on the petioles. This particular fungus is difficult to control, as it lives in the soil and overwinters beneath mulch. Therefore, it often helps to pull back any mulch from the plant.

Printer Friendly Version
Read more about Hostas
Next>
Did you find this helpful? Share it with your friends!
FacebookTweetPinEmail
Related Articles
Newest Articles
You might also like…
Additional Help & Information