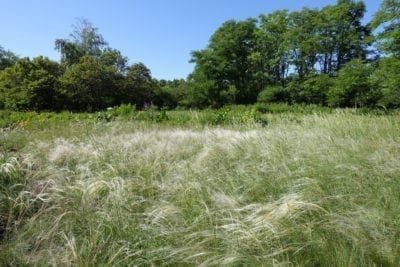 Also known as speargrass and Texas wintergrass, Texas needlegrass is found in perennial grasslands and prairies in Texas, and nearby states like Arkansas and Oklahoma, as well as northern Mexico. It provides good forage for livestock but it can also be used in landscaping for visual interest or to create a natural prairie in your yard.

What is Texas Needlegrass?

Texas needlegrass (Nassella leucotricha) is a perennial grass that thrives in cooler weather. It blooms in early spring to early summer and attracts butterflies. It grows in a range of soils, but especially thrives in soil that has been disturbed. It tolerates heat, needs a lot of sun, and does not need much water.

Texas needlegrass uses include forage for livestock because it grows well in the winter when other grasses have died back. It is also an important part of the natural prairie and helps to reduce erosion of the soil. For home gardeners in the native area, needlegrass can be a pretty addition and a way to include more native plants that enhance the natural ecosystem.

Is Texas Needlegrass a Weed?

You’ll see different answers to this question depending on the Texas needlegrass info source. In places where the plant is not native, it is often considered an invasive weed. In Tasmania in Australia, for instance, needlegrass has been declared a weed because it grows densely and out-competes their native grasses.

In its native region, throughout Texas and nearby states, you will see Texas needlegrass alongside roads and in areas that have been disturbed. This can make it seem like a weed, but it is really just a grass that naturally grows in these spots.

You might want to grow Texas needlegrass if you are looking for native plants to add to your yard. If you live in the region in which this grass naturally grows, you have the right conditions already, and it should be easy to cultivate needlegrass. Make sure you have a lot of sun though, as the grass will not tolerate much shade.

Another important consideration is the fact that needlegrass is a cool weather perennial. It will be at its best in late fall and throughout the winter. You can stagger it with other grasses that thrive in the summer and go dormant in winter. Needlegrass is a great choice if you are planning a native prairie area. It is one of hundreds of native grasses that can help you create this natural ecosystem.

Printer Friendly Version
Read more about Needlegrass
<PreviousNext>
Did you find this helpful? Share it with your friends!
FacebookTweetPinEmail
Related Articles
Newest Articles
You might also like…
Additional Help & Information