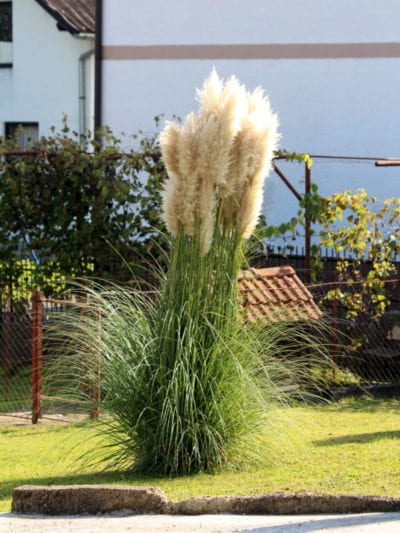 Whether you want to make a subtle statement or a big impact, ornamental grasses can be just the right design detail for your landscaping. Most of these grasses need very little care and thrive on neglect, so they’re perfect for even novice gardeners to grow. One of the few problems you may have with an ornamental grass plant, however, is the stems falling over, otherwise known as lodging of ornamental grasses.

Causes of Ornamental Grasses Falling Over

Preventing flopping grass in the garden is easier once you understand why ornamental grass falls over. Most of the problems associated with flopping ornamental grass is because of gardeners taking too much care of the plants, not too little.

The most common cause of ornamental grasses falling over is too much nitrogen in the soil. If you have a habit of fertilizing your ornamental plants on a regular basis, you’ll be causing the problem you’re trying to avoid. Give these plants one application of 10-10-10 fertilizer first thing in the spring just as the grass blades begin to sprout. Avoid any more fertilizer for the rest of the year.

Another reason your ornamental grass may flop over is that it has grown too big. These plants benefit from being divided every three or four years. Once they grow to an overly large size, the sheer weight of the mass of grass blades can cause the entire plant to bend down and fall over. Divide the plants in spring before any fresh shoots appear and plant each new grass clump far enough away so that it doesn’t shade its neighbors.

How to Fix Falling Ornamental Grass

So how do you fix falling ornamental grass once it’s happened? If the damage has been done and your ornamental grass has fallen over, you can give it a quick fix until the stems are strong enough to hold themselves up again.