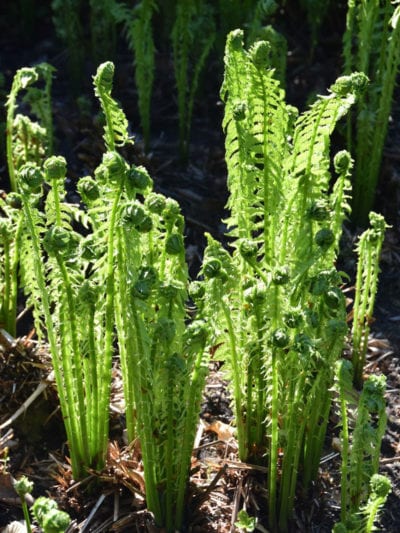 Have a corner in your yard that’s deeply shaded and damp? A spot where nothing much seems to grow? Try planting ostrich fern. Growing an ostrich fern in such a miserable spot can benefit the gardener in several ways.

First, it relieves the gardener of the yearly headache of what to try this year to cover the awful spot. Visually, planting ostrich ferns can turn an eyesore into a triumph of woodland delight, eventually forming a backdrop for other shade lovers like hostas or bleeding hearts.

Looking for a bit of the tropics in your garden? With their pots surrounded by ostrich fern, houseplants of various tropical varieties, many of which need a bit of shade, will look simply stunning. Once you know how to grow ostrich ferns and your plants are thriving, you’ll have the additional benefit of a tasty treat in the fiddleheads you can harvest.

Matteuccia struthiopteris is native to North America and grows quite well in USDA plant hardiness zones 3-7. Once established, it will grow to a height of three to six feet (1 to 2 m.) with a spread about the same. Ostrich fern grows in vase-shaped clumps called crowns. The showy, arching, sterile fronds are plume-like and reminiscent of the tail feathers of the bird from which the common name is derived.

When growing an ostrich fern, you’ll notice other, shorter fronds that emerge a few weeks after the initial fiddleheads. These are the fertile fronds that produce spores for reproduction. These fertile fronds are much shorter, only 12-20 inches (30.5 to 51 cm.) long, and will remain standing long after the larger fronds have died back in dormancy.

How to Grow Ostrich Ferns

There are no special tricks to learning how to grow ostrich ferns. While they can be grown from spores, it’s best to order plants from a reputable grower. Your plants will usually arrive as dormant, bare roots packed in moss or wood shavings and are ready for planting.

Ostrich ferns should be planted in a shallow hole that has plenty of room for spreading roots. Make sure the crown sits just above soil level. Fill in around the roots with any average soil and water well. Take care of ostrich ferns for the first year or so by watering regularly.

Don’t expect too much at first, and don’t panic if the plant appears to stop growing. An ostrich fern’s first priority is to establish a hardy root system. Sometimes the fronds begin to grow and then die back several times during the first season.

Once established, the plant spreads easily through underground rhizomes and will soon fill in the space provided. The care of ostrich ferns is mostly cosmetic and consists of cleaning up debris during the dormant season. They’ll appreciate a little fertilizer once in a while and, of course, water frequently and well during the occasional drought.

Thinking of bringing this exotic-looking bit of nature indoors? Ostrich fern houseplants do well as long as their outdoor growing conditions are met. Keep them out of direct light and keep them moist. Be prepared though for an occasional dormant season where your plant needs time to rejuvenate.

Ostrich fern houseplants need plenty of water and humidity levels that are higher than what is normally found indoors. Misting will help.

Once you know how to grow ostrich ferns and have a good bed established, you might want to try harvesting fiddleheads for a springtime dinner treat. Fiddleheads are the first ostrich fern shoots to show in the spring and are so-called because of their resemblance to the neck of a fiddle. These are the sterile shoots that will grow into the largest fronds.

Pick no more than half from each crown while they are small and tightly curled. Before cooking, wash them carefully and remove the brown papery covering. Fiddleheads can be boiled or steamed and are a particular treat when sautéed in bacon drippings with a bit of garlic. Make sure to cook them thoroughly and use only ostrich fern fiddleheads.

Fixing a problem area with lush and beautiful growth and providing an otherwise expensive delicacy for your springtime table, all while needing very little care, ostrich ferns can be the ideal solution for filling that damp, shady spot.