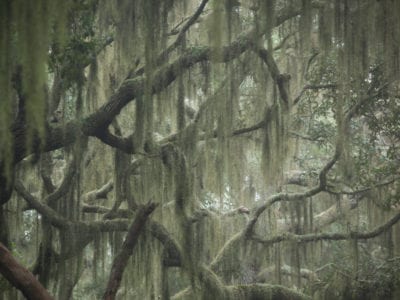 Spanish moss, while it is commonplace in many a southern landscape, has a reputation for having a love/hate relationship among homeowners. Simply put, some love Spanish moss and others hate it. If you are one of the haters and looking for ways to get rid of Spanish moss, then this article should help.

It is important to note that while Spanish moss will not technically harm a tree, it can present a threat, in addition to being an eyesore. Trees with Spanish moss can become overly heavy when moist, which can strain branches. As a result, the branches become weakened and are more prone to breaking.

There is no surefire chemical treatment to aid in Spanish moss removal. In fact, the best way to kill the moss is to remove it as it grows by hand. Even after thorough removal, inevitably the Spanish moss may still grow back. Or it may return after being carried by birds. That being said, you can normally reduce the growth rate of Spanish moss simply by providing adequate fertilizer and water to your trees.

How to Get Rid of Spanish Moss

Since it can be such a pain and time-consuming job when it comes to killing Spanish moss, it is probably better (and worth the money) to call in an arborist or other tree professional to do the work for you, especially for larger trees in the landscape.

In addition to hand removal, the most cost-effective method of Spanish moss control is by spraying the trees with Spanish moss herbicide. Again, professionals are the best choices for this, as they are more equipped for handling and spraying large trees that would not be feasible to the typical homeowner.

There are generally three types of sprays used for killing Spanish moss: copper, potassium, and baking soda. While all are reasonably safe to use and may even provide additional benefits, some may present challenges too.

Copper sulphate is one of the most recommended methods of Spanish moss removal. Copper is a common ingredient in most dry fertilizers and is an antifungal treatment. That being said, precautions must be taken when using this method to get rid of Spanish moss.

Copper is the slowest solution, but it is the most thorough. As a systemic spray, it is deemed effective in targeting and killing Spanish moss. However, copper-based sprays can cause damage to tender growth on trees and any overspray may become potentially harmful to the surrounding landscape. It is recommended that trees be sprayed before budding out or later in the season.

This is an ideal solution for use in more open areas too, rather than near houses because it has a tendency to stain. You should also check the label to make sure it can safely be applied to the trees with Spanish moss you want to treat. You can purchase premixed copper sulfate sprays or mix your own using one part copper sulfate and one part lime to ten parts water.

Using potassium for spraying trees with Spanish moss is another method that quickly kills this bromeliad. Potassium is considered a contact killer. So, for example, if your tree is sprayed in the morning, the Spanish moss should be dead by that afternoon– or within a couple days for certain. While potassium kills the moss, it won’t harm your tree. In fact, it’s a root fertilizer that is beneficial for the tree.

Baking soda is considered the safest solution (besides hand removal) for killing Spanish moss. Yet, again, there are things to keep in mind when choosing this method to get rid of Spanish moss. Baking soda has a high salt content, so it shouldn’t be used on trees with new, tender growth, as this can cause damage. Like potassium spray, baking soda is also a contact killer and very effective.

Prior to use, it is recommended that you physically remove as much of the moss as possible and then spray the affected tree(s). There is also a commercial product called Bio Wash, adding ¼ cup (60 ml.) of baking soda or potassium bicarbonate per gallon (4 L.) of spray is said to work well.