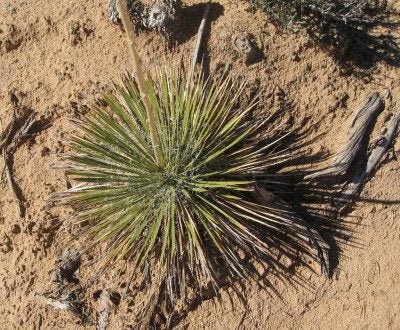 Yucca is a distinctive evergreen plant with rosettes of stiff, succulent, lance-shaped leaves. Shrub-size yucca plants are often the choice for the home garden, but some varieties such as Joshua tree or Giant yucca are actually woody-trunked trees that reach heights of 10 to 30 feet (3-9 m.). The plants produce clusters of white or off white blooms.

A lazy gardener’s dream, yucca is a tough plant that tolerates extreme conditions including dry soil, punishing sun, intense heat, and harsh winds, which means it rarely requires water, fertilizer, or pruning. In general, too much care is worse than no care at all. However, the critical factor that can’t be ignored is soil.

In its natural environment, outdoor yucca plants thrive in dry, sandy, gritty soil where most plants won’t grow. This desert plant absolutely will not tolerate wet soil and too much moisture invites big trouble in the form of rot, a fungal disease that nearly always results in death of the plant.

Unlike most plants that prefer rich, fertile soil a little on the acidic side, yucca likes its soil poor, dry, and alkaline. If you’re thinking about growing yucca outdoors, you may need to improve drainage by incorporating a generous amount of sand or gravel into the soil.

Unless you live in a hot, dry climate, you’re probably more interested in growing yucca indoors. Small, spineless varieties are attractive houseplants that are relatively easy to maintain.

Special potting soils formulated for cacti and succulents are an option for indoor yucca plants, but they may be too rich and often don’t provide the drainage this plant requires. A bag of inexpensive potting mix makes a good base for a simple homemade yucca potting media.

A clean garbage can or a wheelbarrow works well for mixing the potting media. It isn’t necessary to measure exactly and general proportions are good enough. Start with four parts regular peat-based potting mix and mix in five parts perlite— a lightweight substance that promotes healthy drainage. Wear a disposable mask; perlite dust isn’t good for your lungs.

Yucca is a slow grower that doesn’t need frequent repotting but be sure to plant your yucca in a sturdy, wide-based container; it may become top heavy as it grows.