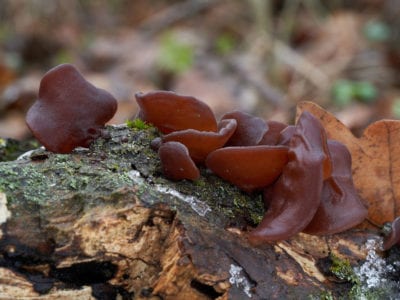 Shoppers of Asian and exotic food markets are familiar with those packages of dried, black fungi known as wood ear mushrooms. Are wood ear mushrooms edible? These are synonymous with jelly ear mushroom, an edible fungus in the genus Auricularia. The wood ear jelly mushroom is a gill-less cap variety with a rich flavor.

The Chinese have long used the wood ear jelly mushroom in recipes. It was thought to improve breathing, blood circulation, and overall health. The mushrooms are mass produced in Asia but also grow in the U.S., Canada, and parts of Mexico. It is one of the first fungi to come back to life after winter and is easy to recognize and forage.

As you would expect, these fungi resemble little ears. The mushrooms grow in crinkly, cap-shaped clusters. They are one of three groups of “jelly” mushrooms, which are generally soft, although Auricularia are more rubbery.

They are brown to almost black and develop on wood decay. You might find them on old logs or stumps in the wild. The fungi might also be on living trees, which is a bad sign for the tree. That means it is decaying. They are prevalent in fall to early winter and reappear in early spring, but since they like cool temperatures, most disappear when it warms up.

As mentioned, the Chinese use them extensively. They are high in protein and iron, but low in calories, carbs, and fat. The mushrooms are usually dried and can be reconstituted prior to cooking. They are often found stir fried or in soups and stews. They are used in a traditional Sichuan salad as well.

The medicinal benefits are numerous. The fungi have been found to lower cholesterol, control blood sugar, and have anticoagulant properties. In regard to the latter, anyone on blood pressure medicine or expecting a surgery should not consume the mushrooms. If you find them wild, use a dehydrator to dry them and store in plastic bags or glass jars. Also, if you are unsure of the type found, it is best not to eat it.

To prepare the mushrooms for recipes, soak them in warm water until they are soft. Then run them under water, using your fingers to wipe off any dirt and residue. Usually, they are chopped into thin strips before being added to a recipe.

In order to preserve their snappy texture, cook them only briefly. When added to sauces, soups, and stews they are one of the last ingredients. In such preparations there is no need to reconstitute them unless they need to be chopped.

Make some traditional hot and sour soup and add this classic ingredient at the end of cooking.