What Is Jelly Fungus: Will Jelly Fungi Harm My Tree? 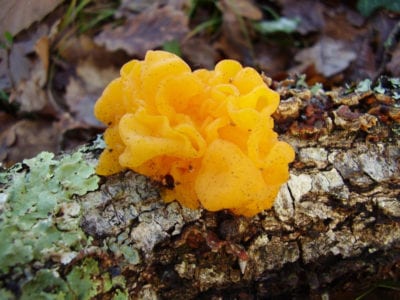 Long, soaking spring and fall rains are vital to trees in the landscape, but they can also reveal secrets about the health of these plants. In many areas, jelly-like fungi seem to appear out of nowhere when moisture is abundant, sending home gardeners scrambling for answers.

What is Jelly Fungus?

Jelly fungus belongs to the class Heterobasidiomycetes; it’s a distant cousin of the mushroom. These fungi appear in a wide range of colors, from white to orange, yellow, pink, or even black, and have a gelatinous texture when exposed to sufficient moisture. One of the most remarkable features of these fungi is their ability to absorb as much as 60 times their weight in water, turning them from tiny, dried up nubs to short-lived, natural art in no time.

Many kinds of jelly fungus appear on trees, but among the most common are jelly ear fungus and witches butter. As the name implies, jelly ear fungus resembles a brown or rust-colored human ear in shape when it is fully hydrated, but on a dry day, it is more of a dried up, raisin looking fungus. Witches butter is often much smaller, so it can almost disappear entirely when it’s dry – after a rain, it resembles bright yellow or orange globs of butter.

Will Jelly Fungi Harm My Tree?

Though jelly fungus on trees looks insidious, this is usually a beneficial organism. A few species are parasites of other fungus, but most help to break down dead tree matter – that’s why they’re often seen by hikers wandering in the woods. This is both good news and bad news for your tree.

The healthy tissues of your tree aren’t in any danger of being damaged by jelly fungus, but their presence indicates that your tree is rotting internally at the point where they’re feeding. If it’s a slow rot, it may go unnoticed for years, but as jelly fungus populations grow, their sudden explosion in weight during a rainstorm can cause these already weakened branches to snap.

A few jelly fungi aren’t anything to worry about, simply prune away affected branches and discard the material. If jelly fungi are widespread and feeding on your tree’s trunk, however, you should call in a professional arborist to assess the health of your tree. Trees with hidden internal rot are serious hazards in the landscape and by calling in an expert, you can prevent injury to your home and the people around it.