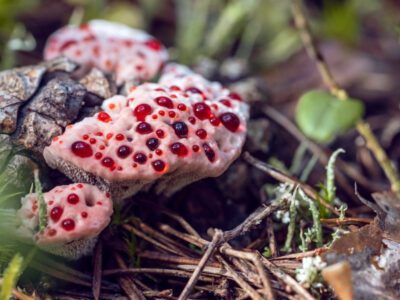 Those of us with a fascination for the odd and unusual will love bleeding tooth fungus (Hydnellum peckii). It has a weird appearance straight out of a horror movie, as well as some potential medical uses. What is bleeding tooth fungus? It is a mycorrhiza with serrated basal spines and oozing, blood-like secretions topside. A mushroom with a flair for the dramatic that is native to the Pacific Northwest.

What is Bleeding Tooth Fungus?

Picture a pale flesh dotted with deep pores seeping thick red fluid. Then turn the thing over and the base is studded with small, but nasty looking spines. Meet bleeding tooth fungus. Bleeding tooth fungus mushrooms are so called because they are a “tooth” fungus and the mushroom oozes a thick substance that looks like blood. In spite of the appearance, the fungus is not dangerous and, in fact, may have a host of health benefits.

Bleeding tooth fungus mushrooms are innocuous when mature. They develop into rather bland brown fungi with unremarkable characteristics. It’s the young ones you have to watch for. They are also often called devil’s tooth but another, more benign, name for the fungus is strawberries and cream.

They are mycorrhizae, which means they have a symbiotic relationship with vascular plants. In such cases, the fungus gets carbon dioxide from the host and the host in return gets better nutrient absorption as the mushroom converts amino acids and minerals into useable forms.

Bleeding tooth fungus mushrooms are filled with mycelia, which spread throughout the forest floor. The bleeding aspect is thought to be a type of sap, which is forced out through the mushroom by excess absorption of water.

With such an unusual and rather creepy appearance, is a bleeding tooth fungus safe? Apparently, the mushroom isn’t poisonous but does have a rather unpalatable and bitter taste. The fungi are found in forested regions, not only in North America but also Iran, South Korea, and Europe.

It hides amongst the mosses and needles characteristic of a shady conifer forest. In some regions the fungus is disappearing, apparently due to excess nitrogen found in soil due to pollution. The fungus has an interesting growth form, in that it is amorphous. This characteristic can find it growing around other organic items such as dropped branches and eventually engulfing the object.

What to Do with Bleeding Tooth Fungus

This mushroom is one of many fungi undergoing trials and studies for its possible medical benefits. One of the main uses for the fungus is as a dried specimen. Dried fungi are made into beige dye for textiles and cordage. When combined with certain other substances, such as alum or iron, the fungi tones change to hues tinged with blue or green.

In the medical realm, the fungus is known to contain atromentin, which is similar to heparin, a widely known and used anticoagulant. Atromentin may also have anti-bacterial properties. Thelephoric acid is another chemical contained in the mushroom, which may have uses in the treatment of Alzheimer’s disease. So don’t let the creepy nature of the young fungus scare you away. Bleeding tooth fungus may be the answer to some of our scarier medical riddles.