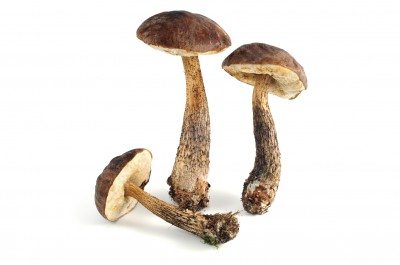 Mycorrhizal fungi and plants have a mutually beneficial relationship. Let’s take a look at how these “good fungi” help your plants grow stronger.

The word “mycorrhiza” comes from the words myco, meaning fungus, and rhiza, meaning plant. The name is a good description of the mutually beneficial relationship between the two organisms. Here are a few of the advantages the plant receives from mycorrhizal activity:

So what does the fungus get out of this relationship? The fungus can’t perform photosynthesis to make food from nutrients, so in exchange for nutrients that the fungus brings to the plant, the plant shares a little of the food it makes from the nutrients.

Chances are you’ve seen mycorrhizal fungi in soil. You may have mistaken them for roots because they often appear as long, thin, white threads entangled among the plant’s true roots.

Mycorrhizal fungi include many species of fungi, like mushrooms. They all have long filaments that resemble roots and they grow near plants with which they can share a beneficial relationship. They seek out plants that have tiny bits of food dripping from their roots. They then attach themselves to the plant and extend their filaments into parts of the surrounding soil that the plant can’t reach.

A plant would soon exhaust its small area of surrounding soil of nutrients, but with the help of mycorrhizal fungi, plants benefit from nutrients and moisture found further from home. In addition, they produce glomalin, a glycoprotein that helps stabilize the soil.

Not all plants respond to mycorrhizae. Vegetable gardeners will notice that their corn and tomatoes thrive when there are mycorrhizal fungi in the soil, while leafy greens, especially members of the brassicas family, show no response. Spinach and beets also resist mycorrhizal fungi. In soil where these resistant plants grow, the mycorrhizal fungi eventually die out.

Now that you know what mycorrhizal fungi can do for your garden, you’re probably wondering how to introduce it into your soil. The good news is that unless you are using sterile potting soil, you probably have some. Commercial mycorrhizal amendments are available, and they can help potting soil develop the amendments, but they aren’t necessary in the landscape.

Here are a few things you can do to help mycorrhizal fungi become established in your landscape: