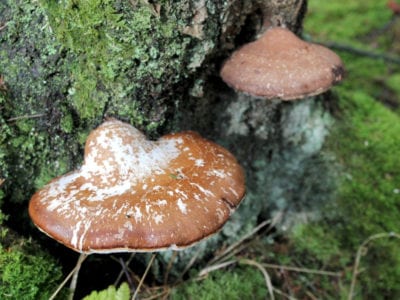 Tree bracket fungus is the fruiting body of certain fungi that attack the wood of living trees. They are of the mushroom family and have been used in folk medicines for centuries. Bracket fungus info tells us that their hard, woody bodies were ground to powder and used in teas. Unlike many of their mushroom cousins, most are inedible and of the few that can be eaten, most are poisonous.

Anyone who has tried to remove one of these brackets will tell you that they are rock hard; so hard, in fact, that they can be carved into works of art and beautiful jewelry.

Tree bracket fungus is often referred to as shelf fungus because of the way it sticks out from the infected tree. They are called polypores. Instead of having spore producing gills, they have many pores lined with spore producing cells called basidia. These basidia form woody tubes through which the spores are released into the air. A new layer of spore tissue is added each season on top of the old; and as time passes, these layers grow into the large and familiar bracket.

Fungus info can be taken from these growths. They are used to determine the answer to the question, “How long does bracket fungus live?”. The rings can give clues to the age of the growth because each ring represents one growing season, but before that can be determined, one needs to know if there is only one growing season per year in the spring or two seasons, one in spring and one in fall. Depending on the number of seasons, a tree bracket fungus with twenty rings may be twenty years old, or only ten. There have been reports of shelves with forty rings and weights up to three hundred pounds.

As long as the host plant survives, the shelf will continue to grow, so the simplest answer to how long a bracket fungus lives is — as long as the tree it infects.

Learn About Prevention and Removal of Bracket Fungus

Tree bracket fungus is a disease of the tree’s heartwood. As stated before, the shelves are the fruiting bodies and by the time they appear, there is usually a significant amount of interior damage. The fungi that cause bracket fungus — and there are many — attack the hardwood interior, and therefore, the structural integrity of the tree and are the cause of white or brown rot.

If the rot occurs in a branch, it will weaken and eventually drop. If the disease attacks the trunk, the tree can fall. In wooded areas, this is merely inconvenient. In the home garden, it can cause great harm to property and people. In older trees with massive trunks, this decay can take years, but in younger trees, the threat is very real.

Like all fungi, bracket fungus likes a damp environment. Make sure the bases of trees don’t stand in water. As soon as the infection is noted, removal of the bracket fungus shelves will at least prevent the spore release that may infect other trees. The good news is that these fungi attack the old and the weak, and often occur after a tree is damaged by man or nature.

Strong, healthy trees respond with a natural chemical defense when damage occurs, which helps fight off fungal disease. Because of this, experts frown on the use of tree wound sealers and research supports their claim that these wound sealers can sometimes make matters worse. Cut ragged, damaged limbs off cleanly and let nature take its course.

Losing a favorite tree to tree bracket fungus is heartbreaking, but it is also important to remember that these fungi also serve a purpose in the natural world. Their consumption of dead and dying wood is part of the cycle of life.