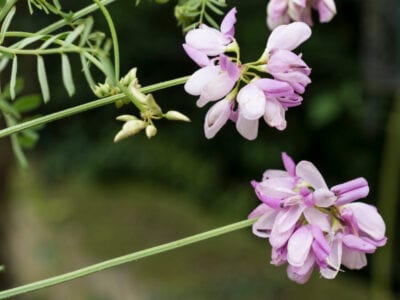 If you are looking for something to naturalize a sloping home landscape, consider planting crown vetch for a natural backyard. While some may think of it as merely a weed, others have long since taken advantage of this plant’s unique beauty and use in the landscape. Best of all, the care of crown vetch ‘weed’ is extremely easy. So how do you grow crown vetch? Keep reading to learn more about this interesting plant.

What is Crown Vetch Weed?

Crown vetch (Coronilla varia L.) is a trailing herbaceous member of the pea family. This cool season perennial plant is also known as ax seed, ax wort, hive-vine, and trailing crown vetch. Introduced in North America from Europe in the 1950’s as a ground cover for soil erosion on banks and highways, this ground cover spread rapidly and naturalized throughout the United States.

Although commonly planted as an ornamental, it is important that homeowners be aware this plant can become invasive in many areas, lending to its reference as crown vetch weed. That said, crown vetch fixes nitrogen in the soil and is commonly used to restore strip-mined soil. Use crown vetch for a natural backyard or to cover slopes or rocky areas in your landscape. Attractive pinkish rose flowers appear in May through August sitting atop short fern-like leaflets. Flowers produce long and slender pods with seeds that are reported to be toxic.

How Do You Grow Crown Vetch?

Planting crown vetch can be done by seed or potted plants. If you have a large area to cover, it is best to use seed.

Crown vetch is not particular about soil type and will tolerate low pH and low fertility. However, you can prepare the soil by adding lime and organic compost. Leave rocks and hunks of dirt for a somewhat uneven planting bed.

While it prefers full sun, it will tolerate some spotty shade. Young plants also do best when covered with a shallow layer of mulch.

Once planted, the care of crown vetch requires very little maintenance, if any. Water new plants regularly and mow established plants to the ground in early fall.

Cover with a 2 inch (5 cm.) layer of mulch for winter protection.

Note: Crown vetch plants are commonly found in mail-order catalogs and nurseries with alternate spellings of one or two words. Either one is correct.