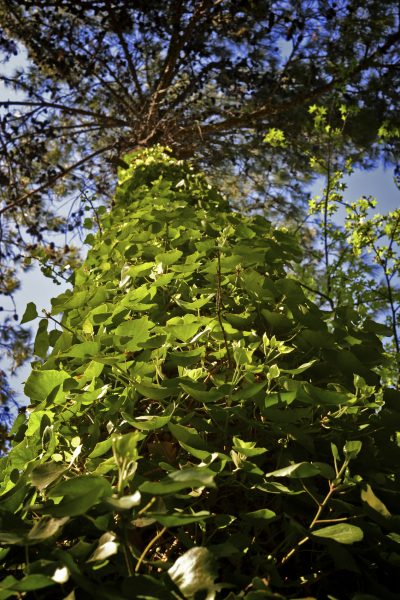 There’s little doubt about the attractiveness of English ivy in the garden. The vigorous vine not only grows rapidly, but is hardy too with little maintenance involved with its care, making this ivy an exceptional groundcover plant. That being said, without periodic pruning to keep it in check, English ivy can become a nuisance, especially with regard to trees in the landscape. Read on to learn more about possible ivy damage to trees and what can be done to alleviate the problem.

Does it Harm Trees for Ivy to Grow?

In spite of differing opinions, English ivy has the potential to damage trees and shrubs at some point, especially when the vine is allowed to run rampant. Overgrown ivy plants can eventually suppress nearby vegetation and engulf tree trunks.

This can lead to a number of issues affecting the overall health of trees. While a tree may survive initially, the growth of ivy vines can weaken it over time, leaving it susceptible to pests, disease and wind damage as well as poor foliage growth.

Ivy damage to trees may eventually result in strangulation  of younger trees due to the sheer weight of overgrown English ivy vines, which can become rather large. As the vine climbs the trunk, it causes fierce competition for water and nutrients.

Ivy roots themselves have the added potential of becoming intertwined with tree roots, which can further limit nutrient uptake. Once it surrounds branches or reaches the tree canopy, English ivy has the ability to block out sunlight and deprive contact with air…essentially choking the tree out.

Additionally, ivy damage to trees includes the possibility of rot, pest infestation and disease issues as trees without proper water, nutrients, light or air circulation are weaker and more susceptible to problems. Weakened trees are more likely to fall during storms, putting homeowners at risk for possible injury or property damage.

Removing ivy from trees is imperative to ensure the continued health of your trees. Even with aggressive pruning of English ivy, there’s no guarantee the vine will remain well behaved. Getting rid of English ivy is difficult, and unbeknownst to many gardeners is the fact that these vines, when reaching full maturity, produce small greenish flowers followed by black berries. These berries are favored by wildlife, like birds, and may result in further spread via random droppings here and there.

How to Remove English Ivy from Trees

When removing ivy from trees, it should be done carefully to avoid damage to both the trunk and the roots. Additionally, it should be noted that the sap of English ivy can cause a rash in sensitive individuals, so wear gloves and long sleeves.

There’s a term referred to as the “Life-saver” method which can be performed in removing ivy from trees. Basically, this involves removal of ivy in a 3- to 5-foot (.9 to 1.5 m.) circle from the tree, like lifesaver candy, with the tree itself being the hole in the middle.

The first step of this pruning method involves cutting away all the English ivy vines around the tree at eye level. Likewise, you can simply choose to cut an inch or two (2.5 to 5 cm.) section from the ivy stem. Depending on the size of these vines, clippers, loppers or even a hand saw may be necessary.

As the individual vines are cut, they can be slowly peeled downward from the bark. Work your way down the trunk to the base of the tree, pulling back the ivy at ground level at least 3 to 5 feet (.9 to 1.5 m.). You can then cut the vines at ground level, treating the fresh cuts with an appropriate herbicide, like triclopyr and glyphosate. Paint the cuts on the still attached stem at full recommended strength.

While you can normally apply herbicides at any time of year to English ivy, sunny winter days seem to be more effective, as the cooler temperatures allow the spray to penetrate the plant more easily.

You will likely have to come back later to treat any new sprouts, but these will eventually weaken the vine and it will stop putting out new growth. As the vine dries out in the tree, the dead ivy can be easily removed from the tree with a slight tug.

Printer Friendly Version
Read more about English Ivy
<PreviousNext>
Did you find this helpful? Share it with your friends!
FacebookTweetPinEmail
Related Articles
Newest Articles
You might also like…
Additional Help & Information