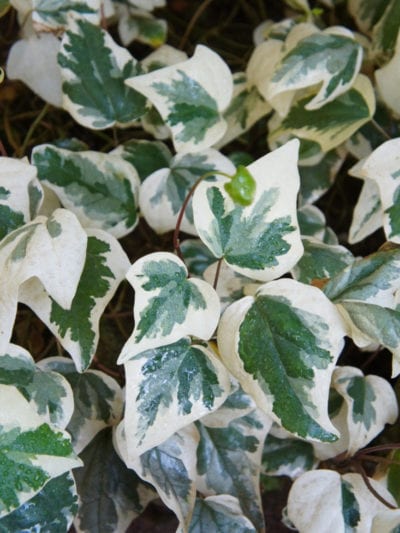 Evergreen vines can help us cover up and soften walls and fences. They can also be used as groundcovers for troublesome areas of the garden, such as slopes or other areas where grass has a hard time establishing. Algerian ivy plants are one such plant that will easily establish, where turf or other plants won’t. Continue reading for more information on growing Algerian ivy.

Algerian ivy (Hedera algeriensis or Hedera canariensis) is also commonly called Canary Island ivy, Canary ivy, or Madeira ivy. It is an evergreen vine native to western regions and islands of Africa. Algerian ivy is hardy in zones 7 through 11. It will grow in full sun, but it may be stunted and will need frequent watering in full sun. It prefers to grow in part to full shade. There are several variegated varieties of Algerian ivy, such as ‘Gloire de Marengo’ and ‘Canary Cream.’ However, when planted in deep shade, the variegated varieties may revert to all green.

When grown in the right conditions, Algerian ivy vines can quickly reach 40 foot (12 m.) long. They climb up walls or spread over ground by aerial roots. Algerian ivy is not picky about soil type and will grow in clay, sandy, loam, or chalky and acidic soil. It does prefer a sheltered location, though, from drying winds.

Algerian ivy does bear flowers and fruit, but the flowers are small, inconspicuous, and yellow to green. The foliage and berries of Algerian ivy are toxic and should be taken into consideration before growing Algerian ivy in locations frequented by small children and pets.

How to Care for Algerian Ivy in the Garden

Algerian ivy plants can be trimmed back in spring to control their growth. As groundcovers, you may need to train the vines to grow in the proper direction to fill in the desired area.

In the cooler regions of their hardiness zone, it may be necessary to mulch plants in fall. Certain varieties of Algerian ivy may develop a bronze or purple tinge through the winter months.

Regular watering so of Algerian ivy is recommended in hot, dry climates. Like many plants for shaded areas, snails and slugs may be a problem.

Printer Friendly Version
Read more about English Ivy
<Previous
Did you find this helpful? Share it with your friends!
FacebookTweetPinEmail
Related Articles
Newest Articles
You might also like…
Additional Help & Information