What Is A Fir Clubmoss Plant? 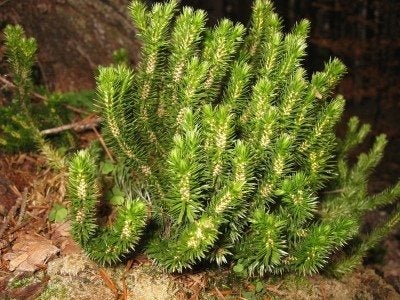 Fir clubmosses are tiny evergreens that look like little conifers. These ancient plants have an interesting past. Read on to find out more about fir clubmoss plants.

What is a Fir Clubmoss?

Fir clubmoss has a long history of medicinal and magical use. In medieval times, the plants were woven into wreaths and armbands. When worn, these adornments were thought to give the wearer the ability to understand the language of birds and beasts. The spores from the clubmosses were used to create bright, but brief, flashes of light in Victorian theater, allowing magicians and actors to disappear.

Clubmosses are members of the Lycopodiaceae family, and they are among the most ancient plants still in existence today. Even older than ferns, they reproduce by means of spores found at the base of the leaves where they attach to the stems. Fir clubmoss (Huperzia appalachiana) is one of a group of closely related and nearly indistinguishable clubmosses.

How to Identify Fir Clubmoss

Fir clubmoss forms clumps of upright stems that look like tiny conifers. At the tip of the stem, you may find small plantlets with six leaves. These little plants look right at home in a rock garden. Many of the club mosses look similar, if not identical. You may have to rely on the differences in their preferred environment to differentiate between the species.

Where Does Fir Clubmoss Grow?

Although it was once used to treat a variety of ailments, fir clubmoss is dangerous if taken internally. Chewing three of the needlelike leaves induces a hypnotic state, while eight can cause unconsciousness. The symptoms of fir clubmoss poisoning include nausea and vomiting, abdominal cramps, diarrhea, dizziness, and slurred speech. Anyone suffering from fir clubmoss poisoning needs immediate medical treatment.