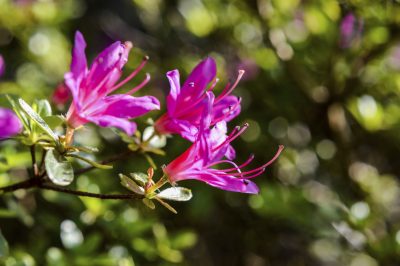 You can grow azaleas from seeds, but that’s not your best bet if you want your new plants to resemble the parent. The only way to be certain you’ll get clones of a favorite azalea is to propagate them vegetatively from azalea stem cuttings. Read on for information about azalea plant propagation, including how to root azalea cuttings.

Rooting azalea stem cuttings and planting azalea seeds are the two main methods of azalea plant propagation. Both will produce new azalea plants, but they may not look the same.

A seedling is usually a cross between two different azalea plants, and can look like either parent or a mixture of both. If you want your new plants to be look-alikes of the parent, grow azalea plants from cuttings.

Rooting evergreen azalea stem cuttings is not difficult if you use semi-hardened cuttings. That means the wood you take should be somewhere between soft and brittle. It should bend, but not too easily. This occurs after spring growth when the leaves are mature.

When you plan to grow azalea plants from cuttings, select parent plants that are healthy and vigorous. Irrigate the chosen parent plants a few days before you take the cuttings to be sure they are not water stressed.

Go out to the azalea parent plant in the early morning with clean, sterilized pruners to get your azalea stem cuttings. Clip off tips of branches, making each cutting about 5 inches (13 cm.) long.

How to Root Azalea Cuttings

You’ll need containers with ample drain holes. Soak the containers in a 1:10 solution of bleach and water to sterilize them.

Use any well-draining rooting medium to start propagating azalea cuttings. One good alternative is an equal mix of peat and perlite. Wet the mixture, then fill the containers.

Trim the cut ends of the azalea stem cuttings just below a point of leaf attachment. Remove all leaves from the bottom third of the cutting, and remove all flower buds. Dip the stem end of each cutting in a rooting hormone.

Insert the lower one-third of each cutting into the medium. Water the cuttings gently. Slice off the upper part of a clear plastic drink bottle and place it over each cutting to hold in moisture.

At this stage, you have started propagating azalea cuttings. Place all of the containers on a tray and set the tray in bright, indirect light. Check the medium frequently and when it is dry, add water.

Within two months, the azalea stem cuttings grow roots. After eight weeks, tug gently on each cutting, feeling for resistance. Once rooting has started, remove the plastic bottle tops.

If you feel resistance, roots are developing and you can start exposing the cuttings to a few hours of morning sun. In late summer, separate the plants and put each in its own pot. Keep them in a protected area until the following spring when they can be planted outdoors.