When Can I Transplant Azaleas: Tips On Relocating An Azalea Bush 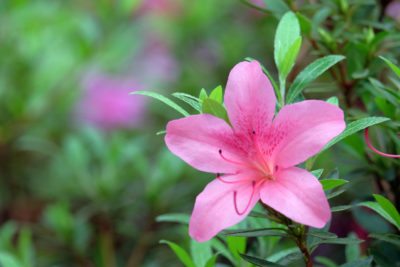 Azaleas are a favorite perennial for many gardeners because of their long lives and reliable flowering. Since they’re such a mainstay, it can be heartbreaking to have to get rid of them. It’s much more preferable to move them if at all possible. Keep reading to learn more about how to move an azalea bush and the best time for relocating azaleas.

When Can I Transplant Azaleas?

The best time for relocating an azalea bush really depends upon your climate. Azaleas are hardy in USDA zones 4 through 9, which is a very wide range as far as temperature. If you live in a lower numbered zone with cold winters, the best time for azalea transplanting is early spring, before new growth has started. This will give the roots a full growing season to become established before the bitter cold of winter, which can really damage a weak, newly-transplanted bush.

If you’re growing in a hot climate, you have the opposite problem. The best time for transplanting azaleas is late summer or early autumn. Instead of bringing possible frost damage, winter provides safe, mild temperatures for your roots to get nice and established before the harsh heat of summer.

How to Move an Azalea Bush

Before you begin to move your azalea, you should find a new site for it and dig a hole there. The less time your plant has to spend out of the ground, the better. Pick a site that’s partially shady, moist, and well draining with a pH that’s slightly acidic.

Next, dig a circle 1 foot (31 cm.) out from the trunk. If the shrub is really big, dig farther out. The circle should be at least 1 foot (31 cm.) deep, but probably won’t have to be much deeper. Azalea roots are shallow. Don’t worry if you cut through some roots– it’s going to happen.

Once you’ve dug your circle, use your shovel to lift the root ball out of the ground. Wrap the root ball in burlap to keep it moist and move it to its new hole immediately. The new hole should be the same depth as and twice the width of the root ball.

Set the root ball inside and fill it in so the soil line is the same as in its old spot. Water thoroughly and keep watering at a rate of about 10 inches (25 cm.) per week until the plant becomes established.