Moving Hydrangea Bushes: How And When To Transplant Hydrangea 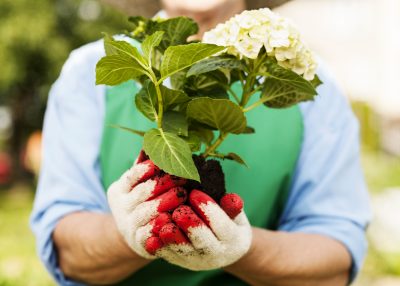 Hydrangeas are a staple in many gardens. Big beautiful bushes that bloom in many colors and actually prefer some shade– it’s hard to go wrong with them. What if you don’t want to keep your hydrangea where it is though? You may especially want to move it if you planted it in full sun last season and have discovered that it’s not doing as well as you’d hoped. Or maybe you just want it somewhere you can see it better. Whatever the reason, transplanting hydrangeas is a common occurrence and not hard to do. Keep reading to learn more about how to transplant hydrangea shrubs.

The best time for hydrangea transplanting is just after the bushes have gone dormant in the autumn. This means the flowers have all died back and most, or all, of the leaves have dropped.

While these are the best times for moving hydrangea bushes, you can really do it any time during the year without killing the plant, provided it’s not in the heat of summer.

How to Transplant Hydrangea Shrubs

When transplanting hydrangeas, the first step is to dig a hole in your new location. Moving hydrangea bushes requires a lot of digging, and you don’t want your poor plant to wait out of the ground for you to dig a big hole.

Pick a location that receives at least some shade during the course of the day. If your hydrangea bush is big and unwieldy, prune it back a little before moving it.

Next, it’s time to dig up your hydrangea. Sink your shovel straight down into the ground in a circle around the bush to free the root ball. Hydrangea root balls can be big and very heavy– it may take more than one person and a crowbar to pry it out of the ground.

Once you get it out, move it to its new home, fill in the soil around it, and thoroughly soak the root ball. If it’s autumn or winter, you shouldn’t have to water it again until spring. Put down a few inches (8 cm.) of compost on top of the soil. When spring does come, water it frequently all through the growing season to help it get established.

If you’ve moved it in spring or early summer, the bush will need lots of water while the roots establish themselves in the new environment.